John Byrne gets a lot of credit for making Susan Richards a distinct character (later, he changes her name Invisible Girl to Invisible Woman).  In this Sue-centric issue, we see Barbara Walters call her out on her title.  (She’s called Barbara “Walker,” but she’s clearly Babs Wawa.)  Sue defends herself, but clearly this has an impact.  The entire interview appears in the issue, so it’s six text-heavy pages.  It’s an interesting way to start an issue—and it works only because Byrne is a solid writer and because it’s kind of “meta.”  At the time, the comic book industry was struggling with its male-focused, girls-with-big-boobs image (see Dazzler and Spider-Woman, e.g.), and these pages were a way to explore the argument that superhero books are inherently sexist.  In The Trial of Reed Richards, about a year later, Byrne similarly explored the ethics of heroes who keep putting supervillains behind bars instead of ending them and saving the lives of those they kill in the future.  In his prime, Byrne was one of the most thoughtful creators in the industry.

From here, she goes home to the Baxter Building to find a Jesus-like man has taken down all of her teammates.  She goes up against him, and learns that he his her son, Franklin, all grown up.  When they’ve all figured out that they’re family, Franklin uses his powers to… …return Thing to his rocky state, the condition he was in before Reed most recently tried to cure him.  Reed explains that he didn’t fully “cure” Thing because Thing would suffer psychological trauma and is afraid that Alicia won’t like him if he becomes human again, but honestly the explanation falls a little flat.  Really, Byrne just wanted to put Thing back into rocky state.  Not sure why he bothered to make him look different in the first place.

Anyway, the effort of doing this saps Franklin of his power and reverts back to a child.

It’s a good issue—even if it resolves a couple things (no pun intended) a little too neatly, i.e., Thing’s change of appearance and Franklin’s power set.

The closing panels offer a glimpse into the mind of Reed… 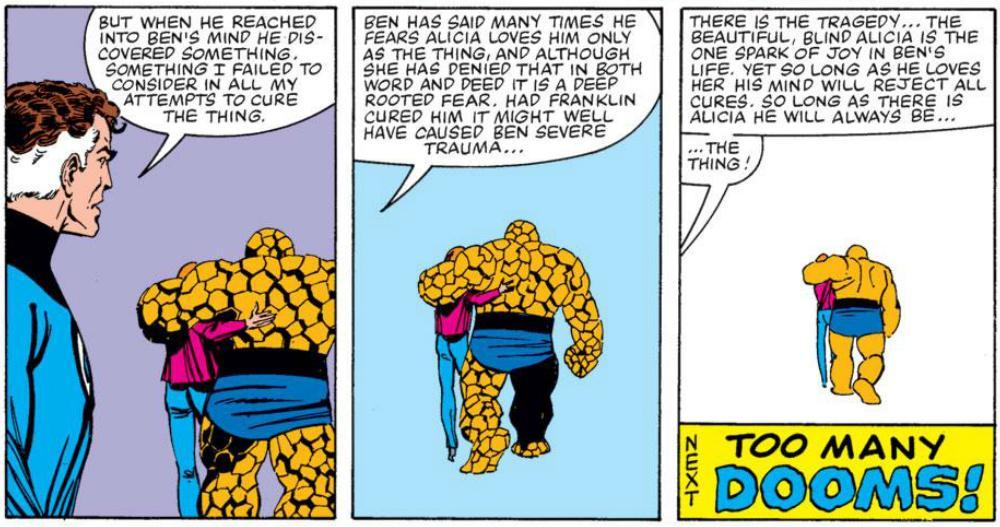