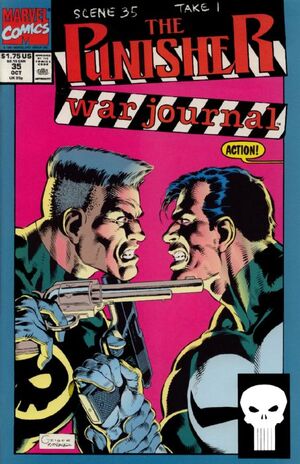 So I’m pretty sure, based on the content and the cover, that this issue is meant to be critical of the Dolph Lundgren Punisher movie that came out about this time. It’s silly, but it’s actually one of the better issues of Punisher so far.  Mainly because it’s genuinely different from the other stories, and has some self-awareness.  The Punisher comic (along with all the one-shots, miniseries, and the War Journal title) has become completely predictable and, although it’s usually pretty well done, it gets old issue after issue.

Also in this issue is a stellar letter column. There are instructions to a kid being bullied, a pop quiz about issue #48, and then a Frank (Pun intended, and there was another pun intended) review of the movie.

Comics At The Movies, Letter Page Banners!, Letters to Comics, Marvel 1991, Punisher (every appearance), Punisher (not comics)
Tweet Pin It