Issue #124 ends with Iron Man killing a diplomat in front of a crowd of onlookers.  Of course, he didn’t mean to—it was another armor malfunction.  But this brings us to the conclusion of the long-simmering Justin Hammer story, as well as Tony’s alcoholism. 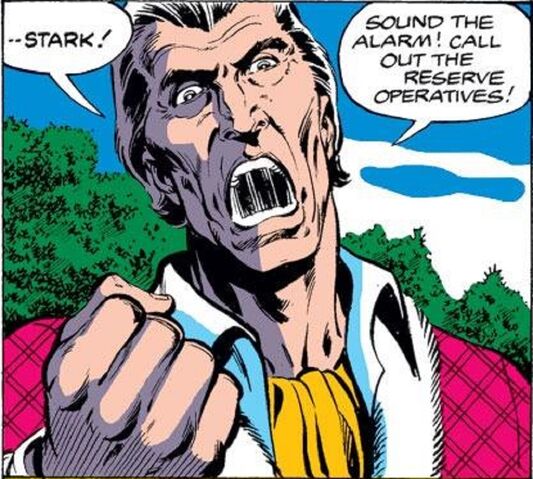 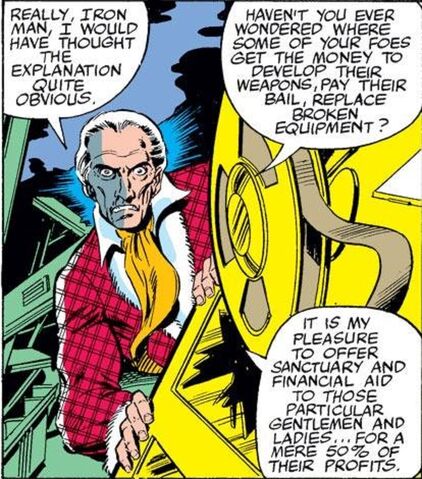 He’s having it malfunction so that people don’t trust Stark International and, instead, will do business with Hammer. 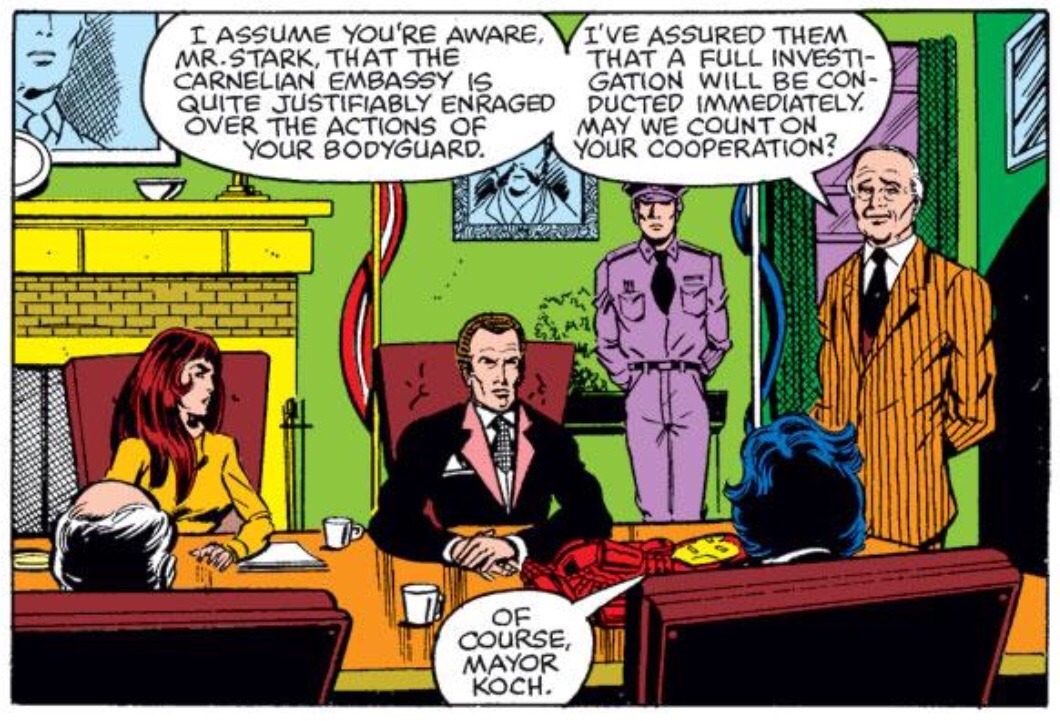 This leads Tony to turn the armor over to the authorities who, as it turns out, are the City of New York (where the murder took place), represented by real-life Mayor Ed Koch. This is my only quibble with this story, which is one of the best of all time: He killed a diplomat.  This at a minimum should be a State-level crime, but in reality would be prosecuted by United States.  That should be Attorney General Benjamin Civiletti, not good old Ed Koch.

So much of this arc is Tony Stark with no armor.  Iron Man 3 (the movie) took a page from this story by turning Tony Stark into a secret agent.

Without his armor, Tony’s got to look into what happened without his super-identity, so he goes to Captain America for fighting lessons. 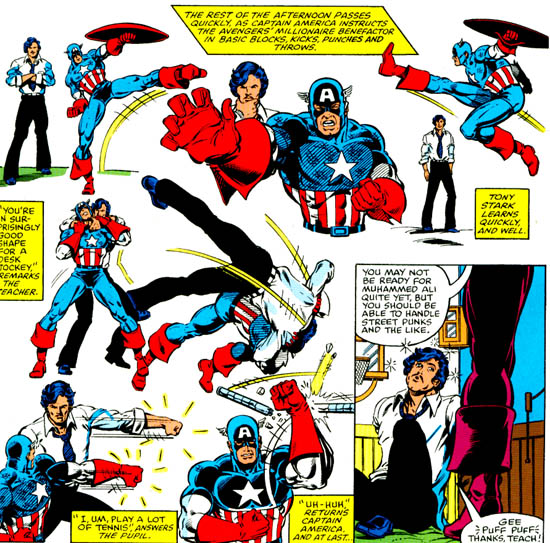 His investigation takes him to Hammer, and in a little bit of a retcon, we learn that some of Iron Man’s enemies have been getting tech upgrades for years from Hammer…Of course, in the end, Tony suits up again and takes on a whole bunch of his weird rogues gallery, all at once: Porcupine, Constrictor, Beetle, even Leap Frog. 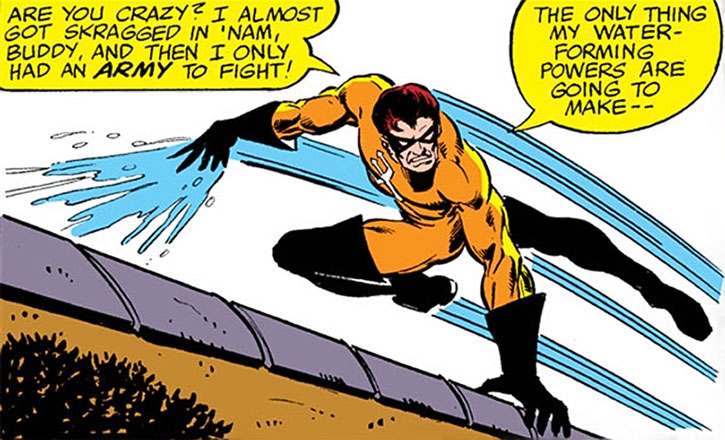 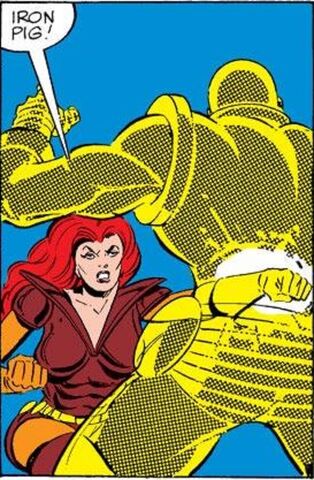 Meanwhile, he’s drinking more and more.  It’s a little bit of a contrast, because he is high-functioning as Tony Stark while he’s taking down Hammer, but it’s an acceptable dissonance that can be explained.  Lots of us know high-functioning, miserable alcoholics. Eventually, Avengers butler—and Stark employee—Jarvis plays a pivotal role.  He resigns—and this is a wake up call that helps Tony hit his bottom.  Really good to see Jarvis actually doing something for a change, instead of just being around in the background.

Some very inside trivia: The text of Jarvis’ letter, which is very clear and easy to read, is taken from the letter Dave Cockrum gave to Marvel management when he resigned.  It’s shocking to me that Marvel editorial let this get through.  Read about it here.  Issue #128 is devoted to Tony Stark’s recovery.  Yeah, it happens a little too quickly for my liking, but it is a comic book after all.  We can’t have issue after issue of Tony going to AA meetings.

And in the end, we learn that when Jarvis resigned he sold his controlling stock to SHIELD.  So Tony will have to deal with that in the issues to come. 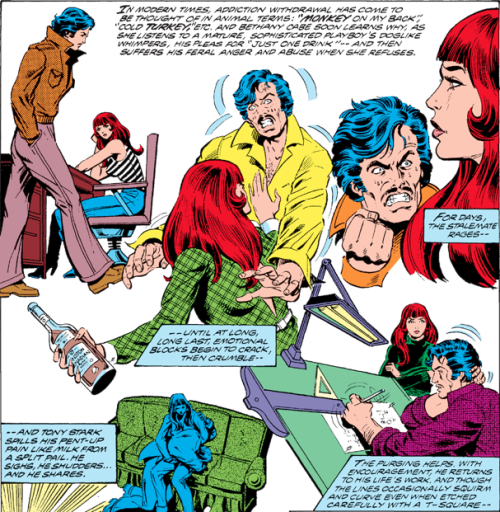 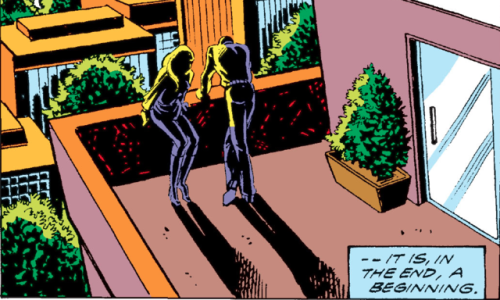 Creators: Michelinie/Romita Jr./Layton
Grade: A+
For the complete history of the MU, year by year, go here.