Beginning with issue #116, which ties directly with Avengers #16, Thor is recalled to Skornheim to for a “trial” that is really more of a sporting event.  Loki wins (by cheating), which begins a scavenger hunt on Earth where Thor looks for evidence of Loki’s deception, and Executioner is hot on his tail. 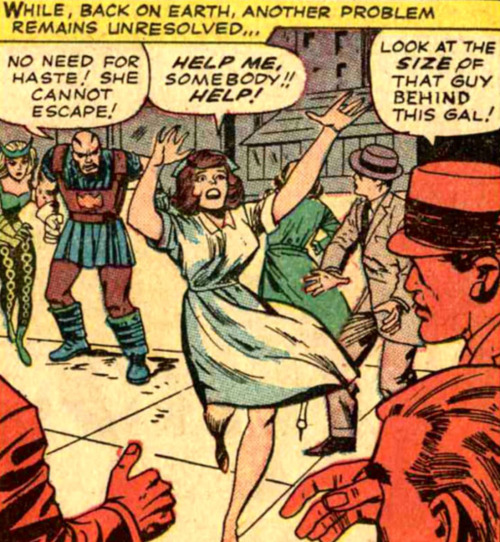 What evidence?  The powerful, magical “Norn Stones,” which Loki hid in Vietnam of all places.  The odd parts of this story are that Thor is taken down by the VC and Thor (and the rest of us) learn that The Destroyer can lift Thor’s hammer! By the end of it all, Mjolnir is literally broken in half and Thor must go to the U.S. to get it fixed.  Because in the 1960s, we still had good manufacturing jobs.

Note: Odin sleeps through most of this adventure in what they call “The Sleep of Life” (referred to later as The Odinsleep).

Also, there’s a brief one-panel cameo by Daredevil, who can’t stop to help Thor because he’s on his way to deal with Namor in Daredevil #7.  It’s cool we get so many continuity references back then, complete with little editor boxes to tell you exactly what issue(s) are being referenced.  Something I love about the Silver Age.