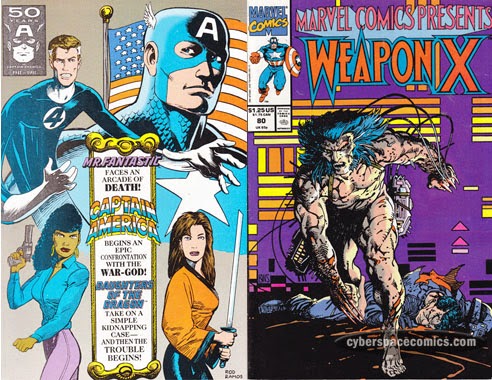 Another quick whip through some 8-page stories from Marvel Comics Presents, starting with Daryl Edelman’s Sunspot story, which features art by no less than John Byrne! Sunspot is back home in Brazil for this story, where some young toughs do a home invasion at a time when he hasn’t absorbed enough sunlight to activate his mutant powers—so they are able to beat him up.

Then they call him names for being a mutant, which makes him mad, and his rage triggers his powers.

I’m crediting this as a forgotten power set.  Sunspot’s powers are solar-based.  There is no indication anywhere else that he can provoke his powers in the same way that Hulk can.

Issue #79 also has a Dr. Strange story, by Robert Campanella and Mark McKenna.  It’s a bit meta, with Strange debating journalist Sarah Wolfe about whether violent movies cause violent behavior—the same arguments are often made about comic books, but the whole thing turns out to be a dream-attack by Nightmare. Nightmare on Elm Street, that is!

Issue #80 has two short stories.  First, a former writer of Power Man and Iron Fist goes back to that well for a story about the Daughters of the Dragon, i.e., Misty and Colleen.  Mary Jo Duffy’s script is drawn by Chris Tsuda.  The private detective team solves a kidnapping.  It’s way too short to matter, but it’s not awful.  Grade: C. Then, Danny Fingeroth and Dennis Jensen give us a little ditty where Reed Richards beats the high score on an arcade game and befriends a kid with a shirt representing the Arnim Zola Defamation League.

I’m giving this a D- grade because that shirt seems to be making fun of Bnai Brith.