Let’s start with the Hawkeye story, since it is the only one that continues over multiple issues.  He goes to Paris to connect with his teacher-turned-villain from his past, Trick Shot, where he meets Marvel’s most famous Frenchman: Batroc the Leaper.

Trick Shot hired Batroc’s gang to attack Hawkeye, but Hawkeye takes them all down pretty handily in just a few pages, with them really not getting too many licks in.  Batroc’s a guy who can go one-on-one against Captain America, so I’m calling bullshit here.  This should have been much more of a workout. 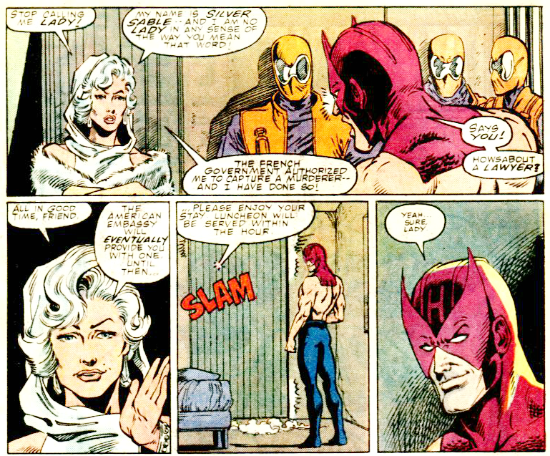 After he beats his foes, Silver Sable shows up and arrests him for the murder of Trick Shot.  I guess she’s a Paris cop now?

Clint quickly escapes from the unofficial prison (no, Sable doesn’t work for the French government so all she really has is a lame holding cell in an apartment).  Turns out, that was her plan all along: She knew Trick Shot had set Hawkeye up as a fall guy and wanted him to escape and prove his own innocence.  Again, this is nonsensical.  He was in Paris anyway, for the sole purpose of tracking down Trick Shot.  He would have done this without her intervention.

Eventually, he tracks Trick Shot down and is put through a contest to prove who is better.  Trick Shot wears Hawkeye’s purple garb.  It turns out, though, that Trick Shot is dying of cancer and wants to be killed by Hawkeye (uh…why?).  Clint, of course, doesn’t kill him and instead hugs him and forgives him.

Arrrrggg!!!!  Clint doesn’t owe Tick Shot ANYTHING!!!  Yeah, he taught him archery, but he also led him into a life of crime!  And even worse, he just set him up for murder charges!

This is a very silly story.  And yet, it’s not an awful comic.

Now let’s run through the back-up stories in these issues, real quick. Issue #3 is a Moon Knight story.  And we see he has a hang-glider. 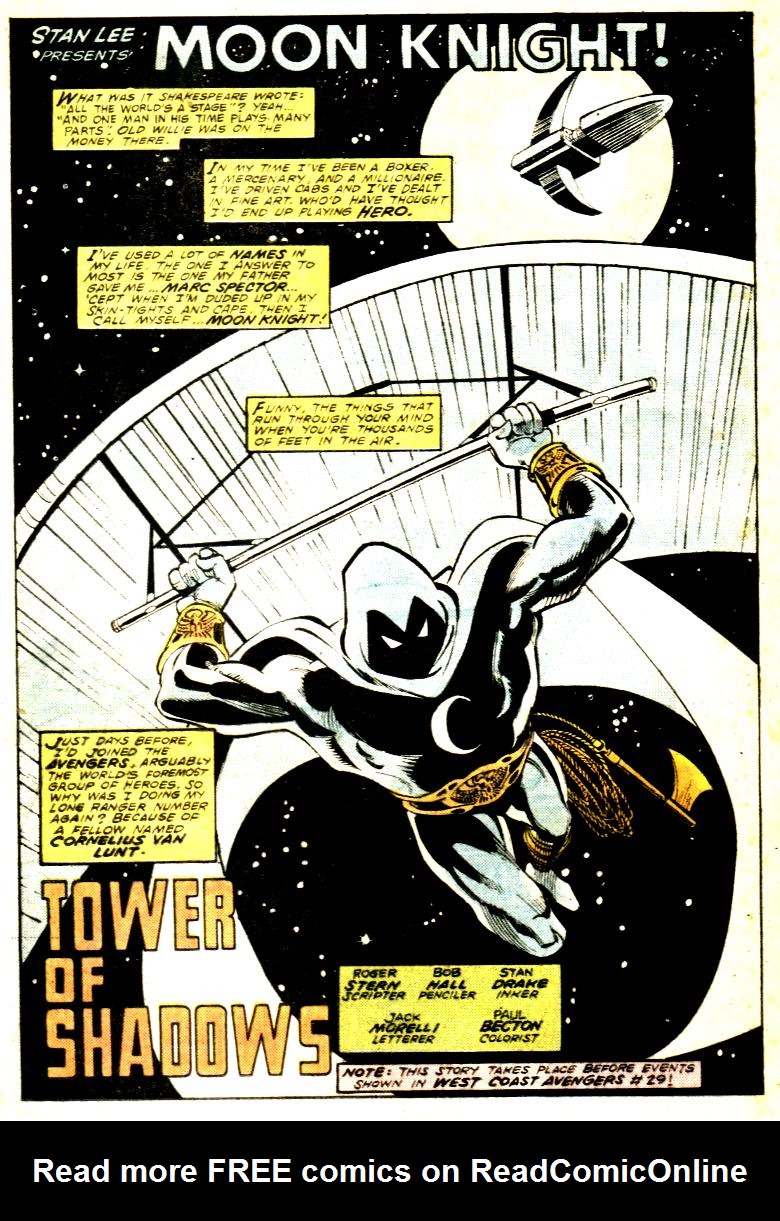 Up to now, I’ve not seen anyone other than Doug Moench write Moon Knight in any kind of palatable way.  Roger Stern is one of the best writers ever, so how does he do?

Well, Moon Knight and Shroud team up but fight first.  And the dialogue is…Not crisp (see above). 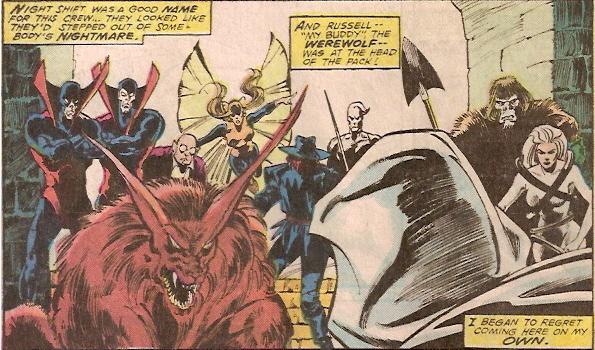 Then, the rest of the Night Shift team show up and ask Moon Knight to be their leader.  Turns out, this was just an audition.  He says no because he’s joined up with The West Coast Avengers.

The story’s not bad, even if nothing really happens.  I always enjoy Night Shift.  But in all, this is a big lost opportunity.  MK is not a good fit with the West Coast Avengers, and I would have loved a MK and the Night Shift book. Issue #4’s back up is (ugh) Black Knight, but it’s also written by Roger Stern, so it’s not completely awful.  He and Dr. Druid try to figure out why Black Knight’s sword is cursed so that BK is in pain every time the sword draws blood.  He ends up fighting a manifested demon of The Last Knight (who last owned the sword and used it to kill himself).

For a story about my least favorite character, it’s not bad. Issue #5 is a Scarlet Witch tale by a writer I’ve never heard of, with pretty darn good art by a British Judge Dredd artist, in which a guy who looks a lot like Constantine (a DC occult character) shows up at her house to examine her “child borne of magic.”

It turns out the mysterious stranger is a manifestation of Death, whose still in love with a mortal woman who is also at Wanda’s house and…It’s complicated.  It’s not bad, but it’s complicated.  This story reads like a Marvel Fanfare tale more than a solo Avengers one—it’s not really an adventure so much as a character piece.  I enjoyed it.