The story involves the Brotherhood of Evil Mutants again, and the first time Sub Mariner meets the mutants, but I wanted to write about the splash page for this issue.  Last issue, Jack drew the Brotherhood eating together, and here we see the X-Men doing the same, and like the panel from last issue, we see much about the characters in a single frame.  Cyclops enforces rules and manners, and it makes him happy to do it—making him smile for “the first time … in months.”  Angel is handsome as hell, and has hidden away his wings again.  Beast looks like Jerry Lewis, oddly, but he’s reading an advanced math text and using big words. Oh, and speaking of manners… 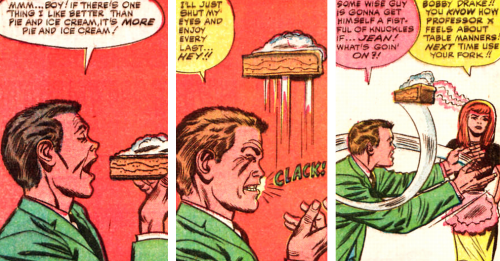 …Anyway, also in the panel above, Iceman makes ice cream.  But does Iceman really thing snow is the same thing as ice cream? 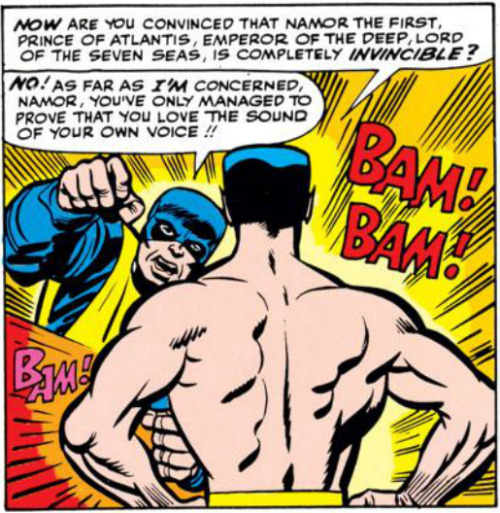 Another gem here is the letters page: Does a housewife really read the book, or is this a planted letter?  I dunno—but Mrs. Steingasser does predict Quicksilver and Scarlet Witch’s defections to the good guys.  (And her name has a double S—Susan Steingasser, which was so common for Stan Lee’s characters.)  Stan was known for asking the readers what they thought about possible storylines, so it’s very possible he was trying to gin up support for a future plotline.