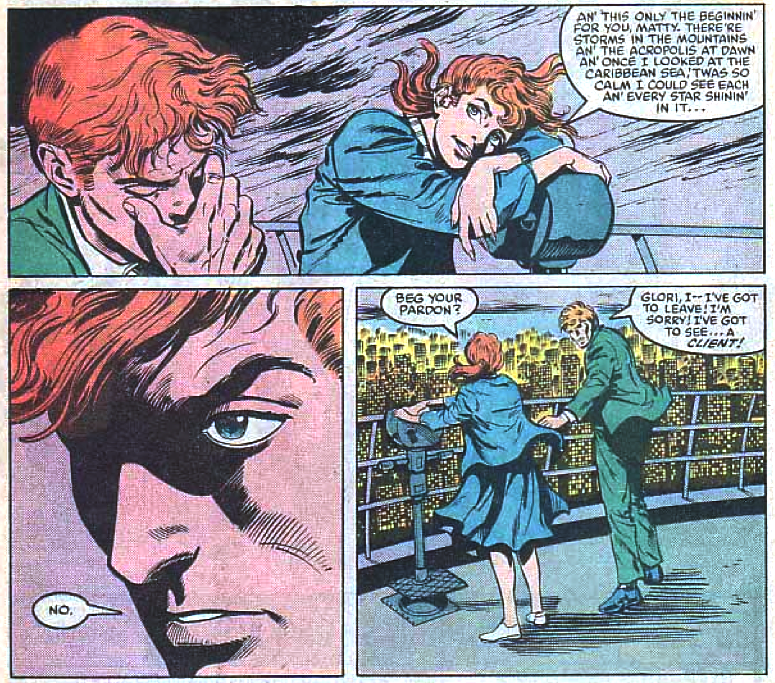 Beyonder needs a lawyer so he can take over the world (this takes place during Secret Wars II issue #3), so he goes to hire Nelson & Murdock.  Now, Beyonder already had tons of gold before he became a pimp and underworld leader (see SWII#3), but instead of using his gold or cash, he grants Matt Murdock his greatest wish. He gives Matt Murdock his sight back.

Throughout the issue, Matt experiences his friends and the world as a sighted person, but eventually realizes that he loves seeing so much, he’s devaluing what he was able to do as blind Daredevil.  So he tells Beyonder to take the gift back.

It’s a decent way to resolve this, but I’m not sure I get it completely.  I mean, he has been developing his other senses and athletic ability since he was a child—he wouldn’t lose those.  Seems he could have just learned to adapt them.  And it seems like he could just as easily have decided that helping an omnipotent megalomaniac take over the world is not something he wanted to do after all, and refuse the gift on those grounds.

On the other hand, it’s consistent with Murdock’s rigidity throughout his entire history to basically refuse something good for him on the ground that it’s not completely within his own control.  Matt has so many problems with relationships because he needs to be constantly in control.  So, it’s true to his character.