Remember when Iron Man gave Peter Parker a suit of armor, right after Civil War? It was lame and stupid. If we wanted to read “Iron Man,” we’d read it. When I buy Spider-Man, I expect Spider-Man.

Well, the roots of the Stark upgrade go all the way back to Avengers #6, when he upgraded Captain America’s shield. I wonder if they ever address this again, or if it just fades away, forgotten. I guess I’ll find out, if I stick with this project.

Anyway, this is a really, really important issue because it forms the Captain America character.  We learn that since he’s returned from the ice, he’s been hankering to go after whoever killed Bucky.

Then, we flash to Baron Zemo, whose origin is that he was making superglue and Cap hit him in the face with his shield, breaking the vat of adhesive and sticking a purple hood to his head.  Yes, seriously.  That’s his origin.  You have to love the Silver Age, right? Anyway, Baron Zemo has been thirsty for vengeance ever since.  They don’t explain why he’s not thirsty for water.  How do you drink with a thick purple hood stuck to your head? 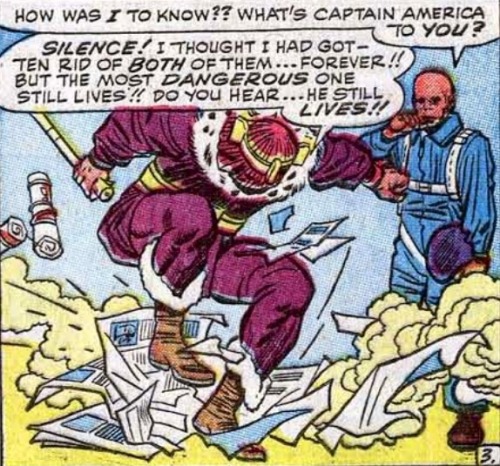 Somewhere along the line, he got a purple pimp suit complete with fur-lined collar, matching his hood, and made more Adhesive X.  Zemo uses it to perform various acts of mayhem against The Avengers, recruiting The Black Knight, Melter, and Radioactive Man as his allies.

Then Radioactive Man says they have to act fast before The Avengers figure out how to dissolve the adhesive and escape their traps and Zemo realizes he’s never thought of that. 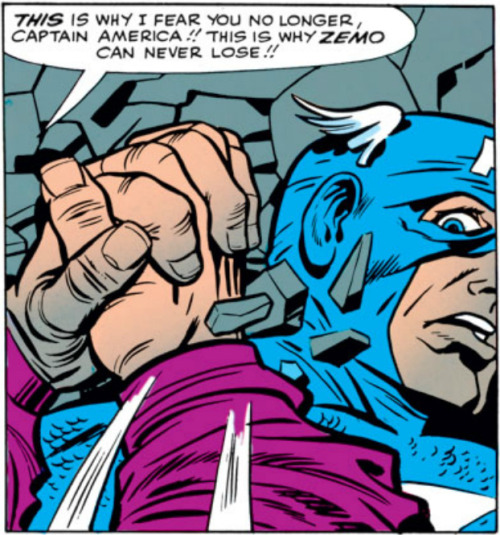 He has a purple hood stuck to his head but he’s never thought of dissolving the glue.  He’s like Homer Simpson stuck in a candy machine because he won’t let go of a Zagnut bar.

So, you see where this is going.  In the end, the team gets help from a warehouse owned by Paste Pot Pete, the master of adhesives.