A terrific issue, largely forgotten, with so many character moments!  It starts with a young dinosaur on the loose in the Baxter Building.  Turns out, Reed was testing Dr. Doom’s time machine platform, which they imported from Latveria after the last time they beat Doom.  The sequence takes two pages, has no meaning at all, but the random craziness of it is part of what make the first 100 issues of Fantastic Four the greatest comic book run of all time.

Eventually, they catch the dino and send him back–and Reed uses his razor sharp wit to compare Ben to a crutch.  Then, Johnny and Ben fight again–and break all the furniture (again)–and Reed comes in with a broom and acts like an ass..  Which he is.  (Although Ben and Johnny’s constant bickering is also pretty asinine).

Turns out, Sue is mad at Reed too. 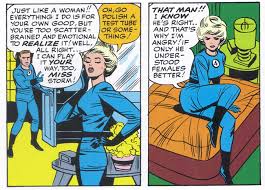 I think “polish a test tube” is a euphemism… 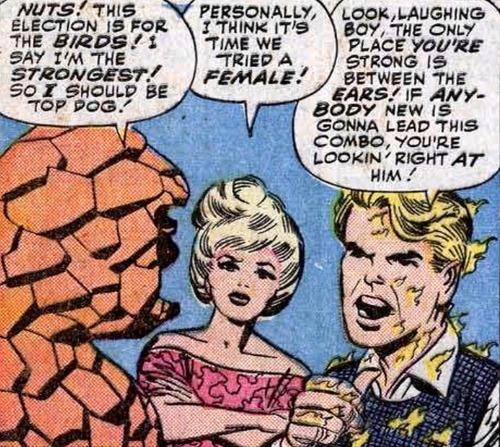 Finally, the main story starts.  See, all that was just background, setting the stage for Doctor Doom’s plan to break up the F4.  He does all kinds of cool things, not the least of which is building a Thingbot.

Yes, Dr. Doom uses a robot to do his bidding.  No Doombots yet, but this is the start.  Stan Lee’s fear of robots of course also pervaded The Avengers, what with the whole Ultron thing.

Doom was working on a new teleportation device that could send people into deep space, and planned to use it on the Fantastic Four.  By the end of the episode, it backfires and Doom himself is cast out into space.

I like that yellow final text box: Stan just admits that Doom’s not dead–he’s not even gonna pretend about that.