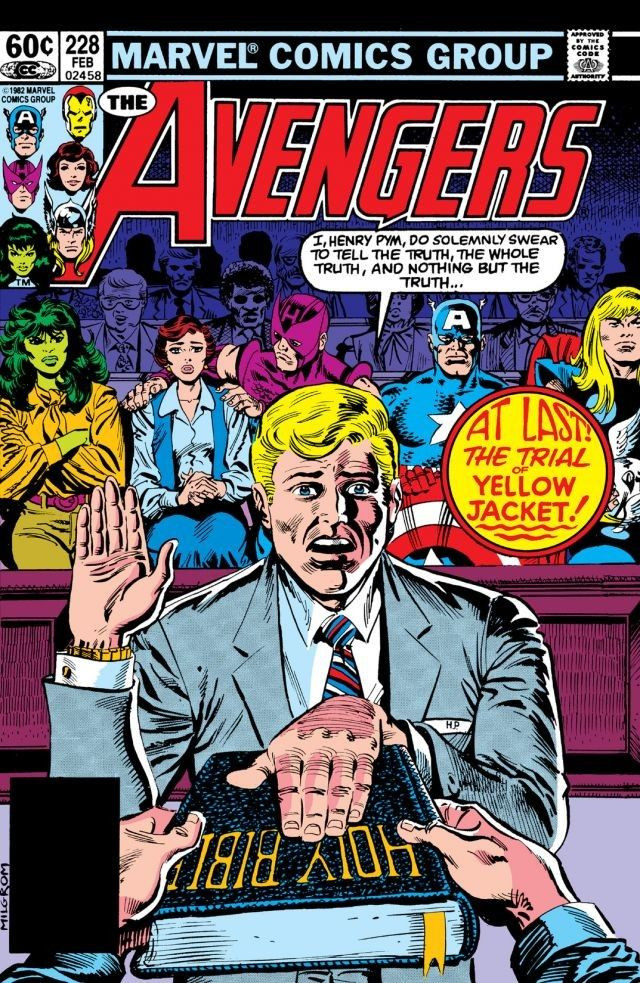 Oh, Roger Stern takes on the three-issue arc about Hank Pym’s trial for stealing Adamantium and generally being a douche when he was tricked by Egghead several issues ago.

He’s been in jail ever since, watching headlines about Tony Stark making the moves on Janet Van Dyne Pym, so he’s understandably upset.  There’s a brief overview of his history, then each Avengers gets screen time as they watch the televised news coverage of the panel and react, and all of them continue to believe Hank is innocent.  Which is weird because he isn’t.  Yes, Egghead blackmailed him into doing what he did, but he still did it.  And on top of that, he beat Jan black and blue.  None of them appear willing to delve into the moral complexity of the situation, but it also makes sense.  After all, these are people who dress in spandex and beat up bad guys for a living—moral relativism isn’t their strong suit.

Meanwhile, Egghead isn’t content to humiliate Pym and have him go to jail.  He forms a renewed Masters of Evil to break Pym out of custody to make Pym look even more like a bad guy.  Egghead is just pain mean. 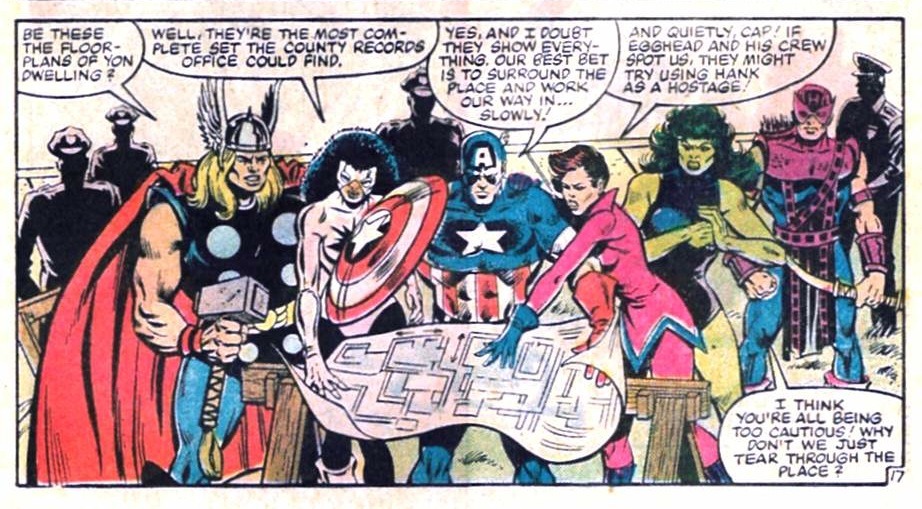 Of course, The Avengers intervene and there’s a nice big battle, in which we learn that radiation can redirect Thor’s hammer!

I don’t think that’s ever happened since, so I’m calling this a forgotten power set for Radioactive Man.

After the fight, all but one of the Masters escape—with Henry Pym in their clutches.  Shocker is captured, which was part of Egghead’s plan because he had hypnotized the Masters’ lamest member into believing it was Hank Pym who arranged for the whole thing and to confess it when caught… This obviously causes more problems for Henry Pym.  Now he’s captured and his former teammates think he’s a bad guy so they won’t try to rescue him.  They also still think Egghead is dead, further disincentivizing any rescue attempt. Eventually, they figure out that Shocker was brainwashed using a mind-investigating helmet invented by Tony Stark and dropped off at the mansion by Scott Lang.  Ah, Tony.  Is there any deus ex machina you can’t facilitate?
Once they know the whole story, they go free Pym from the Masters.  In the process, Hawkeye shoots an arrow into Egghead’s gun to stop him from shooting Hank and… 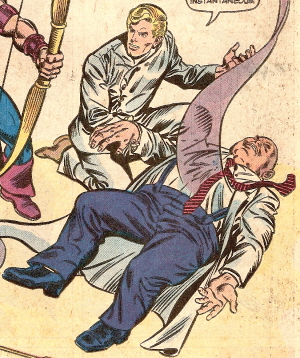 Egghead is killed.  Again.  Albeit by accident, but still—Hawkeye did kill him.
In the end, Hank gives up being a superhero and says goodbye.

Yeah, I could have done without Jan accepting blame for being beaten by Hank, but I get it.  It’s true to her character (which was, of course, created and written SOLELY by white men from the 1960s to this point) and it’s not completely unrealistic, so I’ll accept it.  And how can Hank be a total cad in this story and it’s Hawkeye who gets slapped? 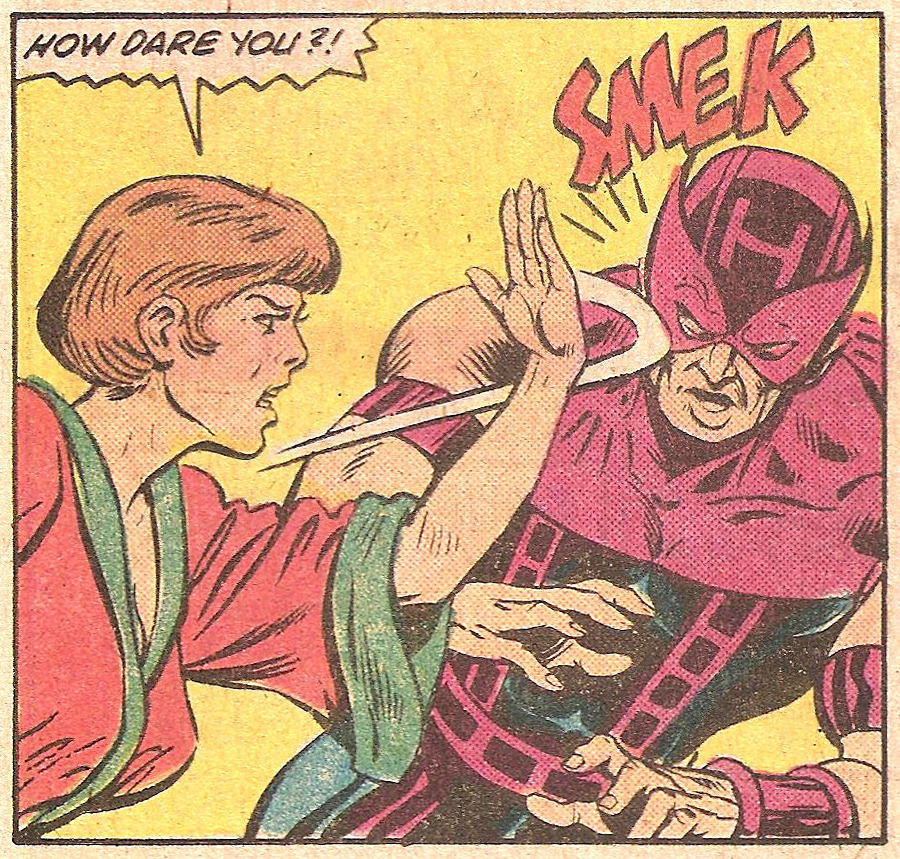 Also in this story: She Hulk thinks she can take Captain America.

And something people often forget: The Avengers were very litigious in these issues.  They also brought charges against Hawkeye. 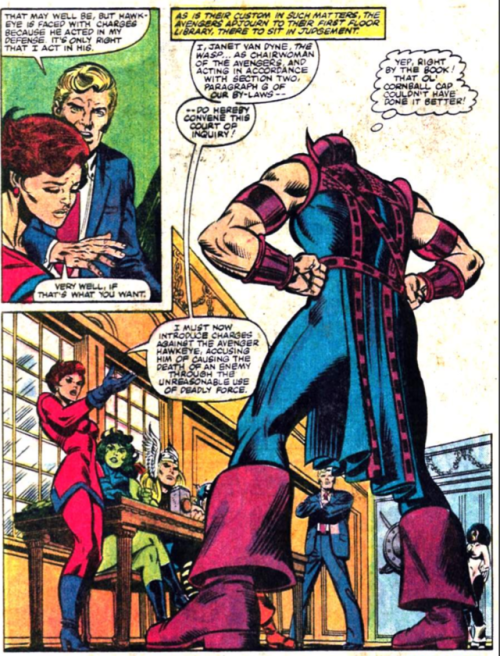 There’s zero reason for this. 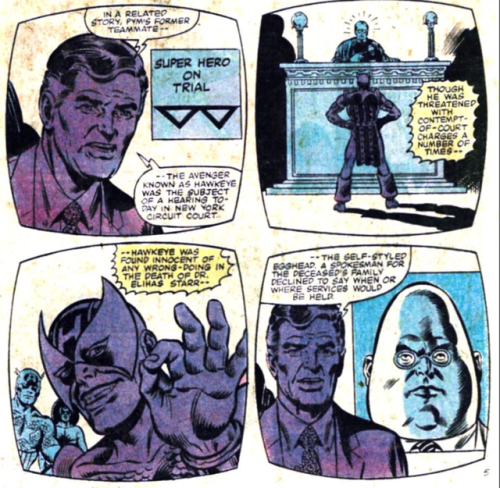