It’s an alternate reality/time travel issue as The Sphinx returns as a female (there’s been a subplot brewing for several issues prior), she’s the Queen of the World, and the Avengers are her allies.  And Captain America wears a skirt.

And the Mutant Liberation Front are recast as freedom fighters–which is pretty much Cable’s wet dream.

The problem is that by the end of this story, The New Warriors and their future allies succeed in restoring the present and stopping the Sphinx’s future, so my question is whether this story is canon?

The way I think of time travel, yes, it is, because the characters at the center of the story–The New Warriors–have memory of it and for them it actually happened. But for all the “alternate version” characters whose pasts and futures get revised and restored, it’s probably not canon because in the Earth 616, for them, it never happened.  The Marvel Fandom site classifies this as Earth 9105.  I wonder how they arrived at that number? 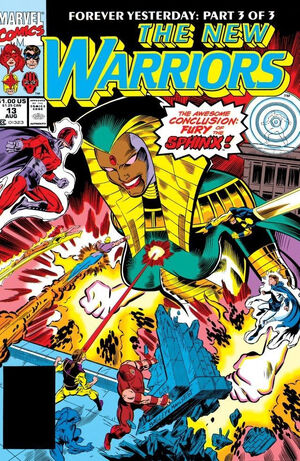 So then the next logical question is: Do I tag them as having appeared here?

And I’m coming to a “no” on that because there’s probably over 50 characters appearing in this story.  Which is what makes it such a great read.