It’s hard to know where to break these issues up as posts because #70-75 are really two stories that run together.  And thematically, they’re very, very similar.  The first story is a four-part tale of Lunatik.  Lunatik is basically just a vigilante with a pipe, and yet he is able to take on the entire Defenders team. Who also seems to be able to stand up to the entire team of Defenders.

Putting the unmatched powers to one side, Lunatik and Foolkiller just aren’t handled well.  It’s hard to write street-level vigilantes-who-kill well, and Ed Hannigan…Is just not a good writer.

And Herb Trimpe’s art is still good for Hulk, but for everyone else on the team…Not so much.

The details of the story are exceptionally hard to follow and, in the end, don’t really matter.  All you need to know is that, at the end of the story, the team breaks up (again).

And to make matters worse, the next story arc will take on yet another Steve Gerber character: Omega the Unknown.

Please don’t let them fuck it up. 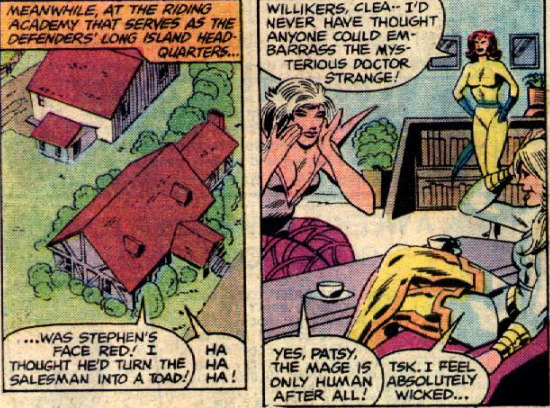