An Ulik/Wrecker story kicks off and basically frames this tale–but it’s not really what this arc is about.  These are the issues where Thor (who was recently merged with mortal Eric Masterson) is eliminated and Masterson becomes a new Thor-ish hero. Loki and Enchantress kidnap Masterson’s little boy to use him as bait, so that Loki can wrest the Thor-consciousness out of Masterson.  Side note: The NYPD special forces team Code: Blue appears briefly to take custody of the lad after Thor saves him from Loki. 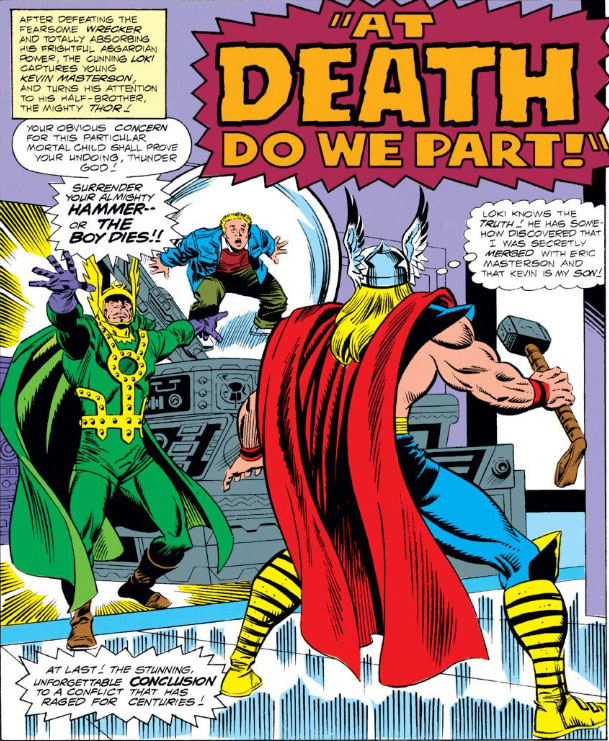 Thor warns Loki that the laws of Asgard won’t forgive him if he pulls Thor out of the physical realm, but of course Loki doesn’t care and feels unbound by Asgard’s “dreary doctrines.”

Oddly, though, it’s Thor who gets banished by Odin.  Odin is such a fucking dick.  Even stranger, his soul is claimed by Mephisto’s realm instead of Hel. After becoming his own version of Thor, which will later be called Thunderstrike, Masterson kicks the snot out of Ulik.

And so begins a new (and awful) era.

Creators: It took a village to make these three issues. Tom DeFalco got script credit, with plotting by Ron Frenz, who also got breakdown credit with Herbe Trimpe, but the finishes were by Al Milgrom.
Grade: