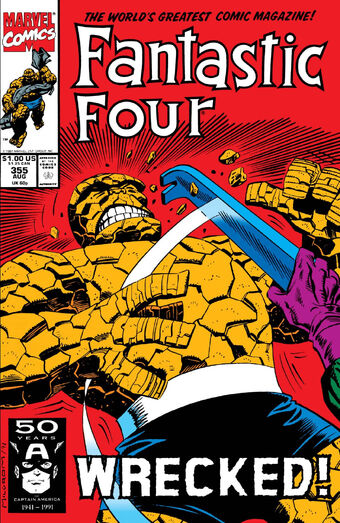 Going from Walt Simonson to Danny Fingeroth and Al Milgrom is…Not an easy switch.  This placekeeping issue feels like an inventory story from Thing’s solo mag.  He’s the only member of the Four who appears in it, and he fights two Wrecking Crew members: Thunderball and Wrecker.  And yeah, he can take them on and win solo–despite that they’ve taken on both Thor and The Avengers.

Anyway, the only interesting thing is the new name for Nick Fury’s agency…

According to Wiki, in 1991 Marvel changed the name of SHIELD to stand for: “Strategic Hazard Intervention Espionage Logistics Directorate.”  Anyone know exactly what issue it was where that change happened?  Because it kinda sucks.