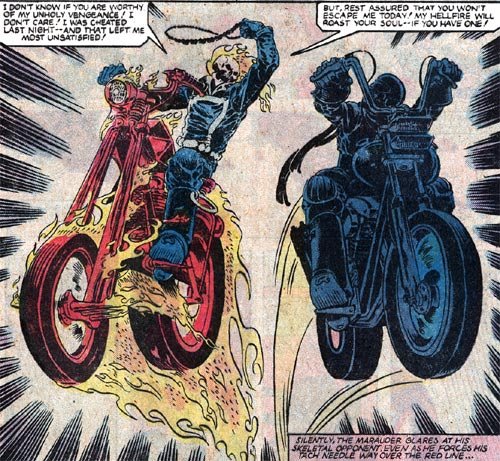 Finally, our year-long nightmare is ending.  And look how many people were fighting for some credit for these last three issues.  Issue #10 is a fill-in.  Yeah, Marvel couldn’t even keep up with production deadlines on a one-year toy-tie-in. 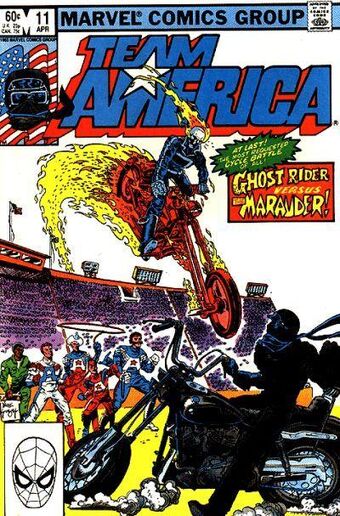 In #11, they inevitably meet Ghost Rider (because they all ride motorcycles), who blows up some Hydra tanks with his hellfire.  (Hydra has tanks in the continental U.S., and SHIELD can’t seem to hunt them down and eliminate them???). In #12, finally learn the identity of the Black Marauder.  And it’s Wrench’s girlfriend.

Only she has total amnesia about it.  We also learn that the whole team were the product of Hydra genetic manipulation in attempt to create mutants, but what they produced didn’t have sufficient powers to keep Hydra interested.  This explains the team’s psychic connections with each other and…I guess the fact that they ride bikes really well?  No, not just that that.  They have the ability to unconsciously and collectively “possess” someone with the Black Marauder identity.  That’s how come Georgianna doesn’t remember anything.

Despite the fact that Hydra seem to have a military stronger than many small countries, the book ends with Team America beating them up.

The team goes on to appear in New Mutants and then Thing’s solo book (he joins Team America!), but by 1985 Marvel has completely given up on them.