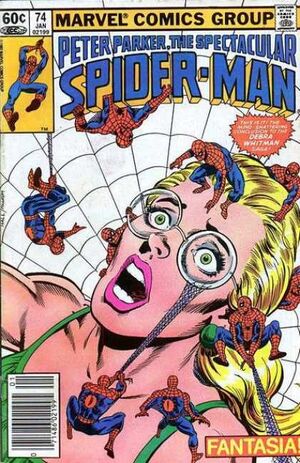 “The One Where Deb Goes Crazy.”

ast issue, we saw Peter confronted by the psychiatrist of his ex-girlfriend, Deb Whitman, who told Pete that Deb had figured out he was Spider-Man.  Only the doc doesn’t believe her.  So in this issue, he gives Pete a fake Spidey costume and tells him to “pretend” to be the hero so Deb can see “the absurdity of her delusions.”  Pete says no.

No wonder she’s nuts.  Her shrink is a total nut.

Instead of doing what that jerk says, Peter starts to look into what’s going on with Debra and learns she’s had a violent and troubled past–his heart starts to feel for her.

You know, if he’s taken the time to get to know her a year ago, he probably would have found her to be a nice girl with a rockin’ body, and she might not have become so desperately crazy if she’d experienced real love.

Anyhoo, Pete decides the best thing he can do is be genuinely honest with her. And here’s the punchline: Also: Pete’s got another psycho in his life.