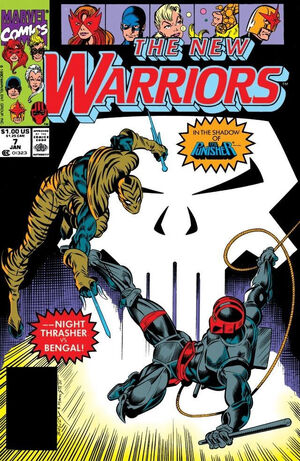 It’s time for The New Warriors to meet Punisher.

Punisher is tracking Silhouette, who he thinks is a criminal like her brother (but she’s not).  Bengal is still looking for revenge against the veterans who killed his family during the Vietnam War. 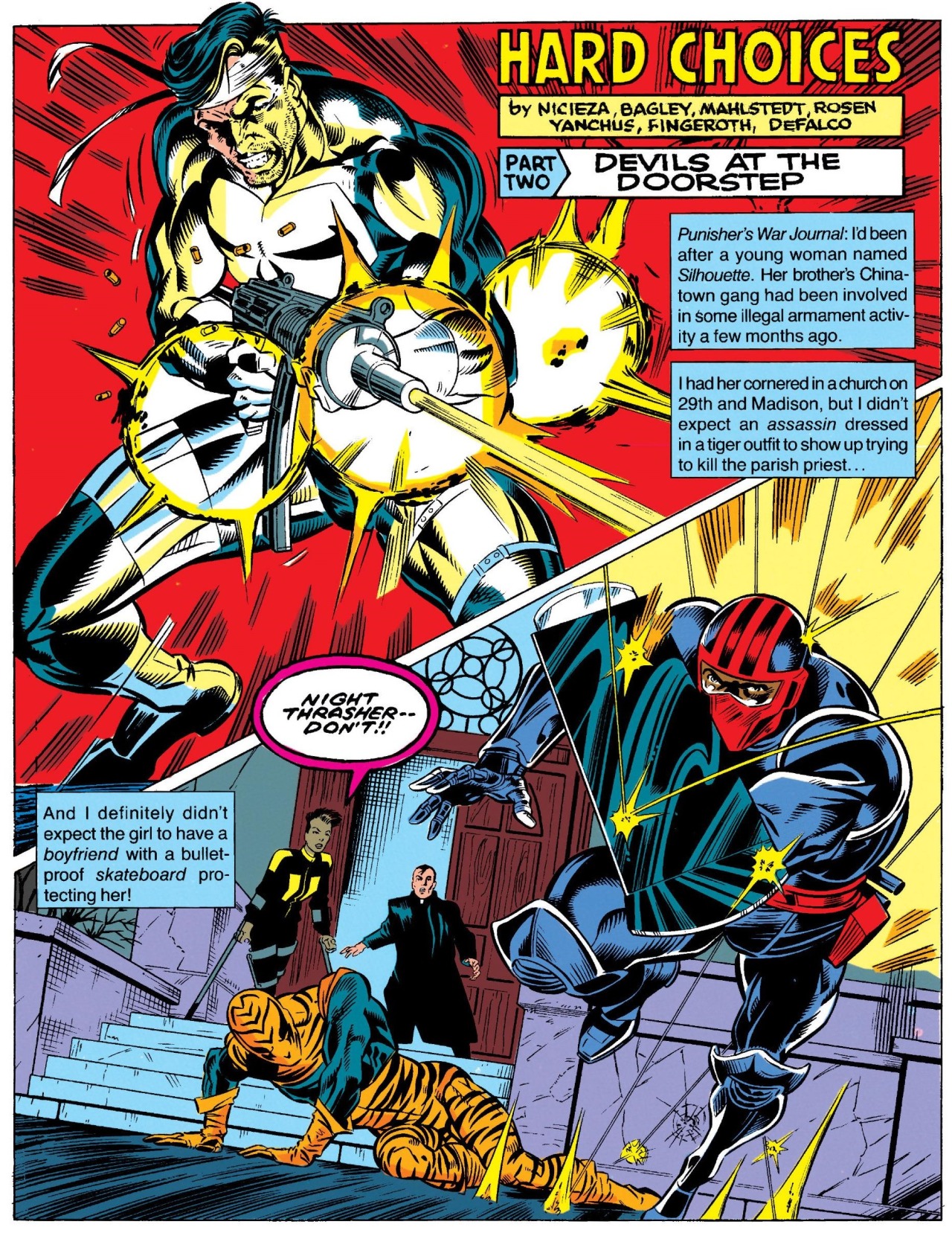 These separate “hunts” (the story is called “The Heart of the Hunter”) come together in a predictable hail of bullets and violence.

Silhouette escapes, wounded, and goes to The New Warriors for help because of her prior relationship with Night Thrasher (we also learn she has a power similar to Nightcrawler where she can fade into, and teleport between, shadows).

Night Thrasher and Punisher have a two-page fight, where Night Thrasher is winning hand to hand, using his skateboard similarly to how Captain America uses his shield, until Punisher gets fed up and just shoots him at point blank range. Since he got beat pretty bad, Punisher looks up Night Thrasher on his computer. 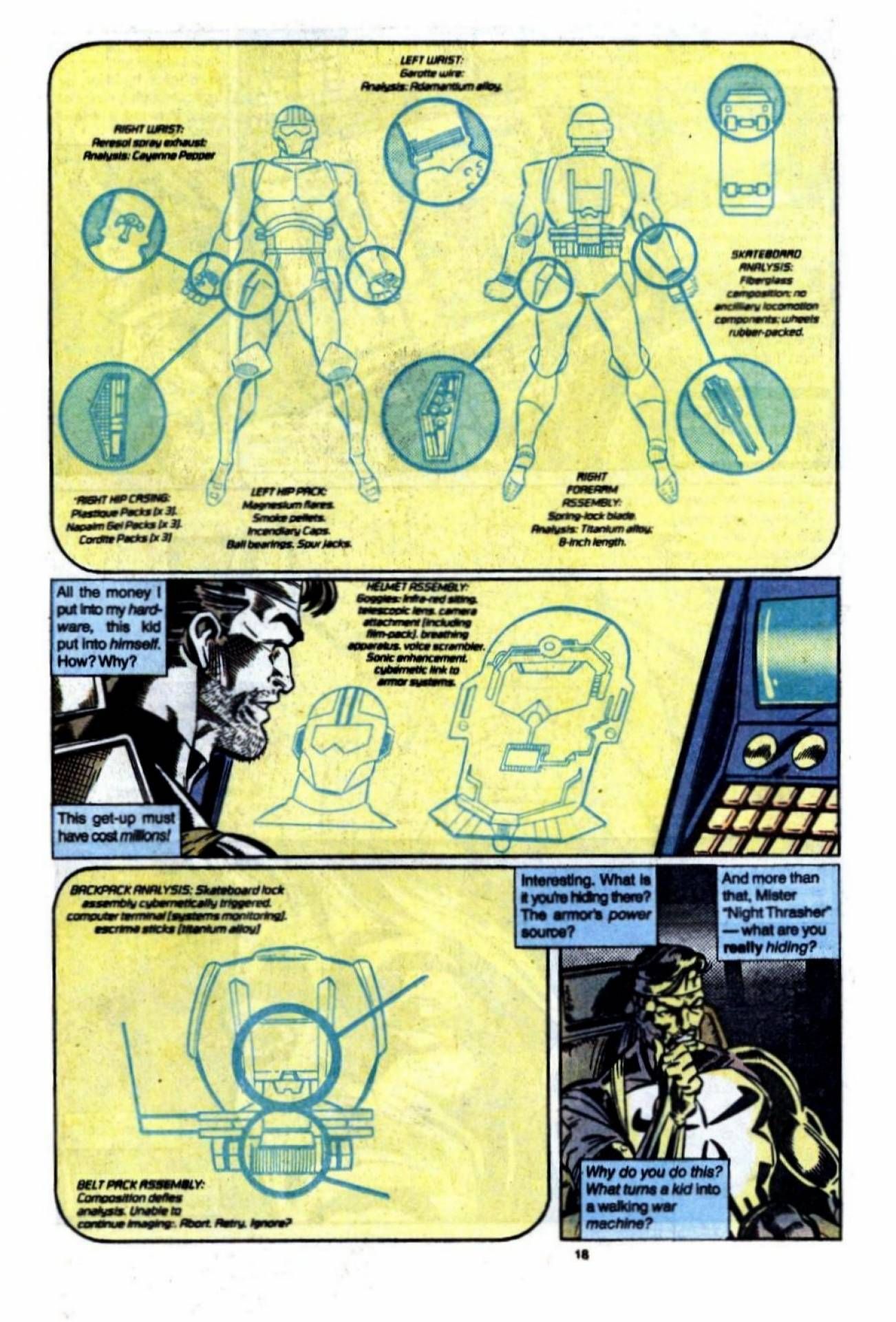 That’s weird.  Wouldn’t he have looked him up BEFORE he fought him?  I mean, Pun is an expert at reconnaissance and is used to being the non-powered guy in a world full of supers.

Anyhow, there’s a diagram. It’s hard to read, but I dig diagrams.

Ultimately, Punisher realizes Silhouette is not a villain, despite her brother’s crimes, so they all team up to take down Bengal.

While all that is going on, the rest of the team has a separate adventure.  Note that the Punisher story only really involves Night Thrasher but it gets cover billing on all three issues because it’s 1991 and Punisher has to be on the cover of every comic unless Ghost Rider, Wolverine, or Spider-Man are on the cover.

Anyway, Speedball’s mom is missing so the rest of the team all help him find her—in Brazil, where they meet The Force of Nature. It turns out, Speedball’s mom faked her own kidnapping to become part of an environmental terrorism group to save the Brazillian rainforest.  The Elements of Doom were hired the developers to stop the environmentalists.  In the end, mommy Speedball decides terrorism is wrong so the team goes back to the U.S.

It’s a weird little story that is, as noted above, secondary to the Punisher plot.  Meanwhile, White Queen thinks Andrew Chord—the civilian leader of New Warriors–is responsible for hacking the Hellfire Club’s computers so she sends hellions out to attack him.  Instead, she meets his mother-in-law, Tai, and learns she’s a force to be reckoned with–before knocking her out. This plotline will finally move to the fore next issue.