Okay, time for one of the best, most-discussed epics in Avengers history: The Kree-Skrull War. And there’s no better way to lead it off than what may be one of my top 5 splash pages in comic book history: Vision playing chess in a turtleneck.

The story spanned almost an entire year of Avengers comics. I’m pretty sure that this was the first time a comic had taken this long to tell a single story. Certainly, it was one of the first “epics” of its kind. Absolutely amazing comics–and timeless, too.

Roy Thomas’ writing can be kind of up and down, but this is an example of why he’s a legend.  It starts with a few issues drawn by Sal Buscema.  These are definitely the weaker ones of the story, and involve Captain Marvel finally escaping the Negative Zone, being followed by Ronan the Accuser, in a muddled, wonderful mess.  But look what happens!

In order to get out the Zone for good, and to no longer have to share bodies with Rick Jones, Mar-Vell absorbs a large amount of radiation–which will, a decade later, cause him to contract cancer. Yes, it’s the beginning of their romance!

Vision shuts down, so Hank Pym switches from Yellow Jacket back to Ant-Man and goes in for an internal repair job, which is really cool and pretty similar to a bunch of future uses of Ant-Man going inside various things like Iron Man’s armor.  It’s probably the best use of Ant-Man, frankly.

In the course of the tale, we also get to see Neal Adams draw Triton of the Inhumans. Is there no stupid character he can’t make look great?  This leads to the involvement of the The Inhumans, and the first time we hear Black Bolt speak… Rick Jones “creates” a bunch of Marvel Golden Age characters out of his head (pretty much just a way to get them into continuity) to save the day, but in the end he has to re-merge with Captain Marvel. 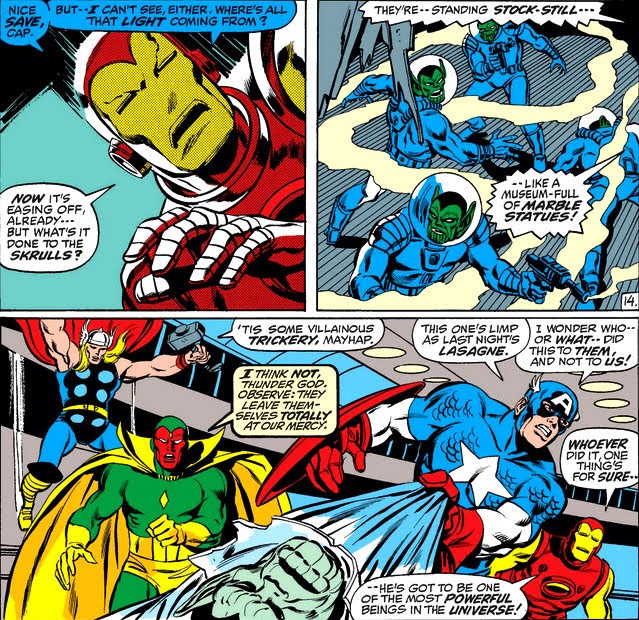