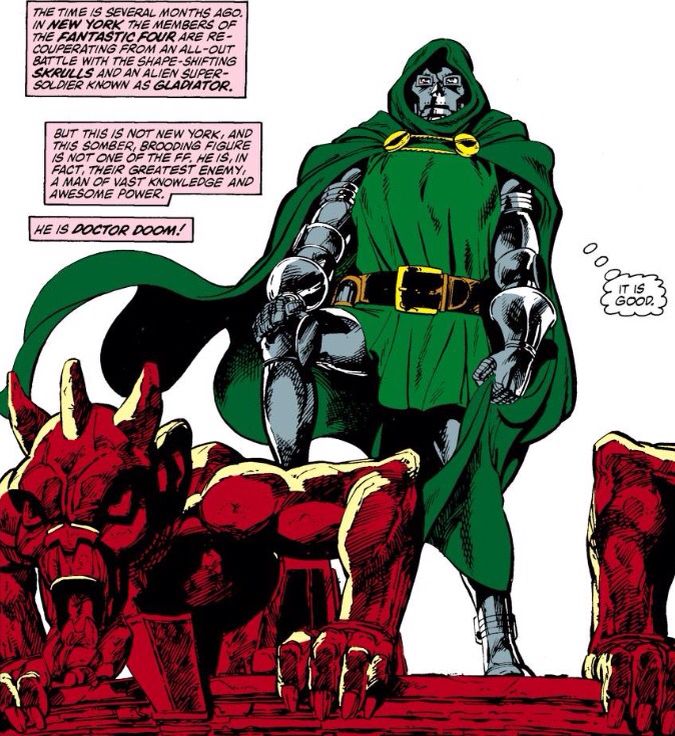 A Doctor Doom solo issue, showing how Doom returned to his throne and restored his country.

This is the issue where Doom famously gets into an argument with his own Doombot and blows it up.

We also get to see him with young Kristoff, the child who he rescued back in issues #247-248, and while it could have been creepy to see the armored villain playing with a kid, John Byrne sells it and makes it work.

It’s the beginning of Kristoff being his ward.

The story develops into Dr. Doom wanting to steal the power cosmic from Silver Surfer again (he did it way back in the Lee/Kirby days), and he tracks down Terrax, whose powers were given to Frankie Raye after he betrayed Galactus a few issues ago.  Doom has a device that can imbue a being with a high power level, but humans cannot withstand the empowering process, so he uses it on Terrax in exchange for Terrax helping him go after Silver Surfer.  Terrax is given special armor that helps contain the power, but eventually it will kill him.  Of course, Doom being Doom, he doesn’t tell Terrax that.  Nice touch.

It’s a lot of set-up for the next two issues, but so cool to have a “solo Doom” story!  There’s a lot of details here that are very worth reading—it develops Doom’s maniacal intelligence and his skills as a master strategist.

For the complete history of the MU, year by year, go here.
And see my Ratings of Runs on comics here.
\