It starts off with Crystal leaving again because she can’t survive in the world of humankind.

Then, Reed tries to cure Thing but he has to sit in a chamber for a long time.  And Johnny calls him a “hunk of hamfat.”

During that, some dude named Janus goes crazy in New York and the team fights him but they have to rush to get Thing out of the machine in time…

And he can control his changes!  Thing starts to go a little nuts–a side effect–but not before a side trip into the Negative Zone.  Notice how nice the art is in the above two panels.  It’s John Buscema.  He’s truly an underrated master of the craft.

Interestingly enough, we see the roots of Jonathan Hickman’s “death of Johnny Storm” as Reed Richards has to stay behind in order to save his teammates and the world, and contain the Negative Zone.  Issue #108 has art credits for Jack Kirby, John Buscema and John Romita.

And now Buscema is the regular artist.  His run would last for about the next hundred issues.  It wasn’t unbroken, so he didn’t come close to Jack Kirby’s amazingly consistent run, but it’s impressive nonetheless.

And it may be sacrilege to say this, but I like him more than Jack. 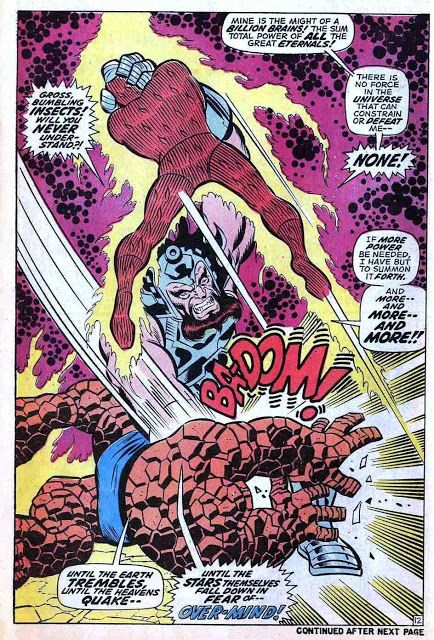 By the end of #110, Ben is getting increasingly out of control, and Overmind has appeared and is getting frisky.

The cover to this issue is one of my favorites.  I’m not sure what it is about it–Ben throwing a solid steel lampost at Johnny.  Torch vaporizing it before it makes contact.  The cops yelling.  The bystanders in the windows of the building pointing up at torch in awe and horror.

It’s John Buscema.  I loved Buscema’s work on Conan, but to me this is some of the best of his career.  But I’ve gushed enough about John in this post.  Back to the FF.

Here’s the weird thing: The title on the comic is “The Thing Runs Amok” but look at what Reed is doing inside the comic.  He’s losing his mind and totally assaulting his landlord.  This happens in the next issue, too.  It’s one of the few ways the FF seem kinda…Batshit crazy.

These issues keep getting crazier. 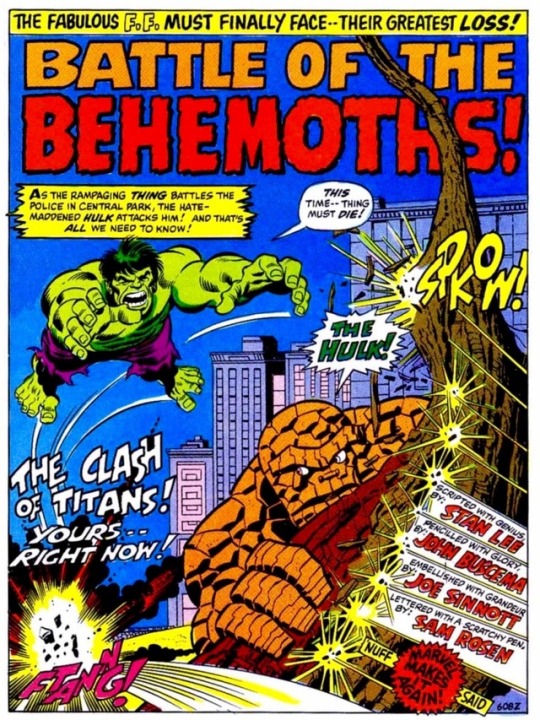 In #112, Hulk makes an appearance and fights with Thing.

I know it’s like bad vaudeville, but I enjoyed it.

The theme for these issues is mind control and loss of control, so it made sense to include Hulk.  In the end, though, Overmind, Janus, and crazymaking cures notwithstanding, love conquers all…

Wow.  Twelve issues.  A full year in one post.