In this issue, the enemy (“Cobalt Man”) is really just a lame version of Iron Man.  In fact…

He’s after Iron Man when the X-Men intervene.

But most of the story focuses on the characters and their personal lives.  I couldn’t resist posting Beast finding Bobby’s “ice pole,” but the real crucial panel from this issue is this one: Who’s that?  Candi Stanton, who will be Angel’s girlfriend for the next 15 years or so.  It helps Cyclops out because Angel was a rival for Jean.  He’s a millionaire with a generally positive attitude.  Cyclops is a morose codependent who can’t even look you in the eyes. He needed his competitor eliminated!

Meanwhile, Bobby seems to be British. 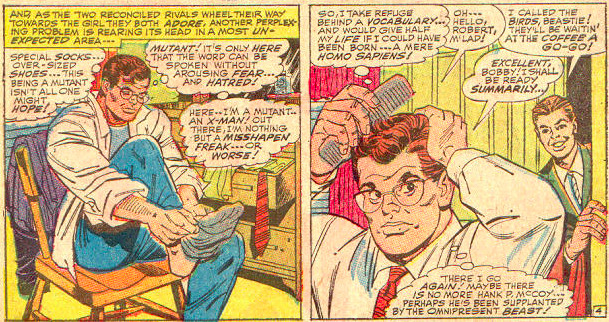 “Birds”?  And there’s a hint of Beast’s ape-like future…