It starts with Spider-Man and Nomad versus Taskmaster. 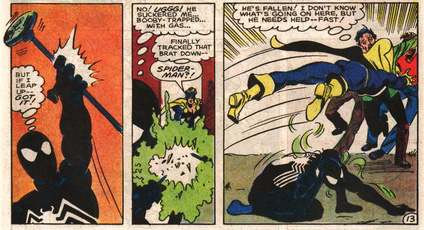 He’s forcing scientists to work for him and manufacture a machine that enables Abbott to control peoples’ minds.  Turns out, one of the scientists thinks Peter Parker would be a good addition to the team.  So, Abbott tries to kidnap Peter and Human Torch comes along to help.

There were much better ways to have Spider-Man continue to be involved with Black Abbott following issue #146.  This was pretty contrived.  Similarly, Thor gets involved because Abbott commits a crime near the construction site he works at in his secret identity.