Count Nefaria, still striving to be the head of the Maggia, gathers himself some very, very lame lieutenants and, instead of going after guys like Spider-Man or Daredevil, who actually fight street-level criminals, decides to take on The X-Men again. I still love that a semantical game like saying “Maggia” instead of Mafia satisfied the comics code authority.

And speaking of name-changes, most historical sites list these early X-Men issues “The Uncanny X-Men #xx.”  Yet, the title on the cover says only “X-Men.”  Marvel’s official site says a “The X-Men” book started in the 1990s, and this 1960s volume is indeed The Uncanny X-Men Vol. 1.  I think it’s revisionist history.

Anyway, guess what he tries to do?  He tries to frame The X-Men for a crime!  How Stan Lee got away with using the same plots over and over escapes me, but here there’s even a fresh writer on the book, Roy Thomas, and he’s doing the same exact thing! Other interesting thing: Nefaria puts a whole city under a bubble.  Sound familiar? Maybe because John Byrne did it, too, years later.  So I guess this story is kind of foundational.  Kind of. But it’s not very good.

On the character front, Jean still pines for Scott.  But she dates Warren. 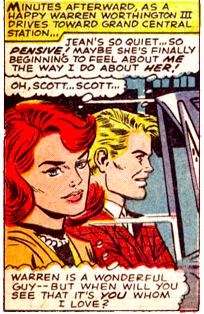 Because there’s only one girl on the team, so naturally she has to sleep around.