This one is completely bizarre.  Some dude called The Monocole invents a Neutrak Ray that makes weird stuff happen and he tests it on the FF.  I can’t really tell where they were going with this.  Nowhere, apparently, because the Neutrak Ray never reappears.  However, Crystal gets taken back to The Inhumans.  This storyline gets dropped, though, for the next two issues and doesn’t matter until #99 when Johnny goes and takes on the entire Inhumans team to get Crystal back. 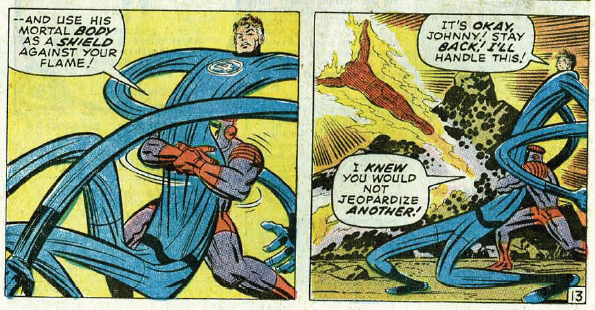 In the meantime, we get a filler issue against The Mad Thinker and his lookalike androids (#96) that seems as if it was written before #95.

Yes, that’s right.  He made android versions of the FF and he can’t tell them apart.  The only thing missing is a panel where Thing says “Shoot him, he’s the real Thing!”  “No, shoot him, I’m your android creation!”

Then, in #97, we get “The Monster from the Lost Lagoon.”  Talk about derivative and pointless.   Even Thing recognizes how similar the storyline is the classic horror movie.

A tribute sequence….I’m counting this as a celebrity cameo of Neil Armstrong.