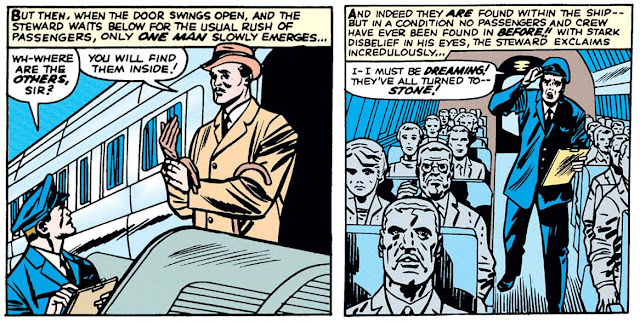 This is the first appearance of Grey Gargoyle, and he’s introduced in a pretty creepy, horror movie style, as he kills an entire plane full of people. I’m not sure why, but I’m a huge Grey Gargoyle fan.  And yet, until I decided to do this feature, I never read the dude’s origin.  Above is the first time in the issue we see him in full costume and learn his name, but that’s not how the comic starts… Instead, it starts with Thor giddy in love.  Literally.  Jane Foster tells Donald Blake she cares about him, and Thor goes baloooey.  Look at the couple on the bench in the park.  Jack Kirby rarely draws sheer joy, so this is a very cool sequence.

But back to the action.  Grey Gargoyle, like probably 90% of Marvel characters, was a scientist who got exposed to a science thing and gave him weird powers.  In this case, he’s the King Midas of stone.  Everything he touches turns into rock.  Including himself.  But for some reason, when he does it to himself he’s still able to walk around and do stuff. When he rocks other folks, they turn into statues for a period of time.  Anyway, Gargoyle appears to hate being made out of stone.  Sound familiar?  Yes, it’s Ben Grimm redux.  But for some reason, even though he hates his life, he still wants to live forever and he thinks if he can steal Thor’s hammer he will get the secret to Thor’s immortality.

This idea of people stealing Thor’s hammer starts to happen almost every issue.  But I’m not tired of it. (Yet.)

A really good issue of a comic that used to be abysmally bad.