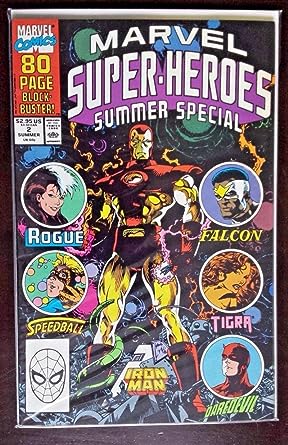 There are stories about Iron Man and Daredevil, who have solo books so…Why?  Anyway, Iron Man is working on a space craft and there’s sabotage.  Daredevil’s tale is a Matt Murdock “adventure” where the lawyer investigates a child abuse case and finds out that the kid has needles ‘cause mommy is a diabetic.  Seriously.  That’s a comic book story.

Next is Speedball, who is continually featured in these kinds of books and couldn’t carry his own solo title but still made it into New Warriors, but at least I understand why.  It’s because Steve Ditko wants to draw it and, let’s face it, Marvel owes him a debt they can never repay.  Or more precisely that they could have repaid with money but instead kept throwing him bones like letting him draw comics nobody gave a shit about.

Rogue is also a team-player, and she gets a story from back in her white-on-top mullet-hair day, where she take son Mystique for no real reason.

The best of the lot features Tigra, who currently can’t be seen anywhere.  And it starts as a character piece, with her going to visit her dying father.  Now we’re talking.  She looks and act feral, and nearly kills some thugs who attack her dad in his hospital bed.  We learn they were trying to protect corporate secrets because her father is dying from cancer due to exposure to something at his job site.  Tigra investigates, finds the cure, and steals it—leaving the company’s owner, who also has the exposure disease, without a cure to die.

This is a good short story.  It has a point, means something in the life of an underused character, and features a nice ironic twist.  Well done.  (Although having FOUR creators on a 10-page story seems like overkill.)

Finally, Falcon, fights a bunch of Iron Man wannabes who rob a local youth center.  The big turning point occurs when one of the youth center kids steps into the battle to help Falcon, and gets killed by the bad guys.  I do like when there are bystander consequences in comics, even if this is pretty much a by-the-numbers story.

At least all of these are short stories.