It’s funny–#41 introduces The Rhino, the first Spidey villain designed by John Romita, and it takes Spider-Man three issues and sixty pages to defeat the dude.  You’d think that the battles would be memorable! 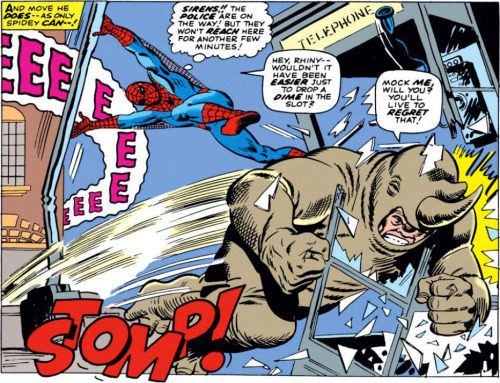 But The Amazing Spider-Man had become a book in which its lead character often appeared out of costume more than in.  Also, JJJ is smarter than everyone else.

Peter Parker’s personal life was becoming more interesting than his life as a superhero!

Anyway, issue #43 is Peter and MJ’s first date–and I’m devoting a whole post to that, next.

Also in these issues: Peter gets some bitchin’ wheels.  But it’s no Spider Mobile.