So much crammed into such a short issue!  Not only did we meet The Impossible Man, one of my favorite FF characters, but Reed intentionally cured Ben for the first time.

The Impossible Man story only takes up half the issue-the second half has The Fantastic Four answering fan mail, and in so doing giving an extended read on Ben Grimm’s back-story as a fighter pilot, apologizing to feminists that Susan Storm does a lot more than just hang around and be invisible, and, most important of all, introducing Willie Lumpkin.

Willie delivers mail to the team, and one of the letters provokes Sue into a reverie.  We get a revelation that Ben and Reed served in WWII together, and that Ben and Sue grew up together. 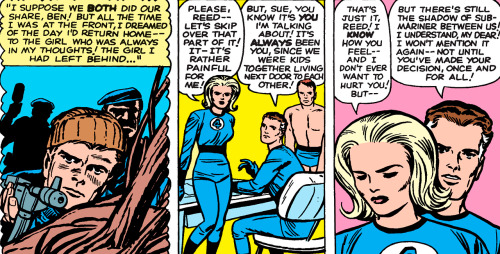 And Reed shows some jealous feelings about Sue, which is unusual for him.  Sub-Mariner is really the only character who can consistently provoke that kind of reaction from him. 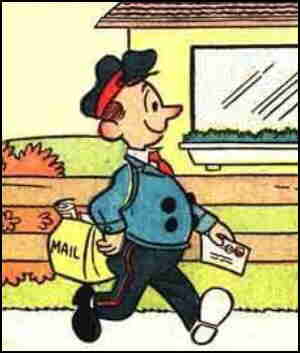 The postman would be a popular sidecharacter for decades.  He even got his own comic, a one-shot, in 1989’s Marvel Comics Presents #18, and was played by Stan Lee in the 2005 Fantastic Four movie.

Although Fantastic Four #11 is his first Marvel Universe appearance, Willie was actually from a newspaper syndicated strip written by Stan Lee and drawn by Dan DeCarlo, in which he looked pretty different.  The strip was discontinued in May 1961 after about a two-year run.