Like the early issues of Thor (in Journey into Mystery), Hulk doesn’t seem to get Stan and Jack’s “A” game.  The early issues aren’t awful, but “great” isn’t a word I’d use for them.  Still, all the elements of the character’s best stories are here.  In issue #3, for example, he is locked away in a bunker under the ocean, where Bruce Banner and Rick Jones trapped him.  Remember, in these issues it is nightfall, not rage, that triggers the beast.  Much more predictable. 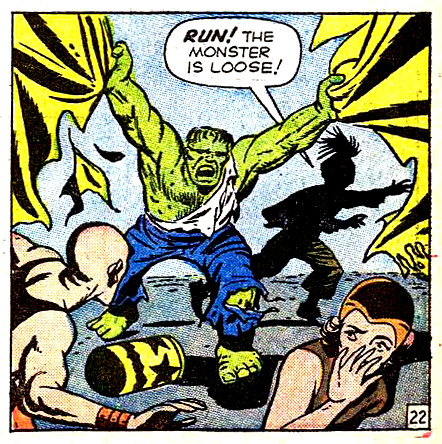 The main story is Hulk vs. Ringmaster.  Nothing real memorable there.  The character wouldn’t appear again for two years, when he’d host the first Spider-Man/Daredevil team up.

Also, Rick Jones gets the power to control Hulk…

Don’t worry. It wears off next issue, when Hulk moves from ripped jeans to purple trunks.

Creators: Stan Lee and Jack Kirby
First appearance: Ringmaster.
Grade: C.  If anything that happened in this mattered more, I’d grade it higher, but it’s a standard script and story.  I do have to say that if it were being graded against all other comics in 1962, it would grade higher–but I’m rating it against other Marvel books from that year.