Ronan the Accuser comes to Earth on orders from The Kree Supreme Intelligence (which is a Marvel character that’s impossible to take seriously because it looks like a Jell-O mold) tasks Ronan with kidnapping Ms. Marvel to “become the mother to a race of new Kree that no force in the universe can withstand.” 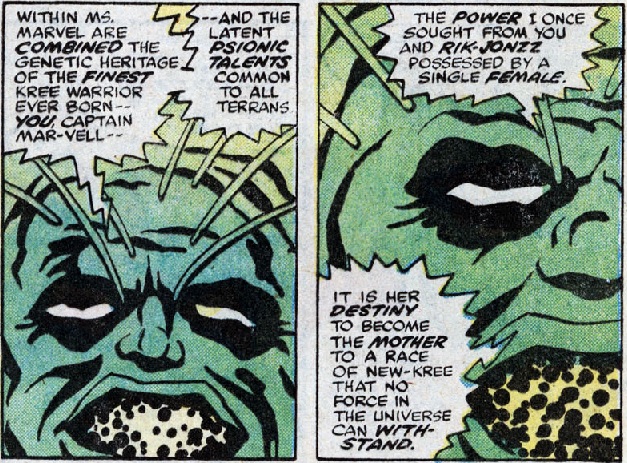 Rick Jones is identified by the Supreme Intelligence as Rik-Jonzz.  Perhaps he’s related to D.C.’s Martian Manhunter?  A joke of course, and how can a “Supreme” Intelligence not know how to say Rick Jones’ name?

Captain Mar-Vell happens to come along and is surprised to see a woman wearing his uniform.  He tries to intervene.  Ronan defeats both of them and takes them to his spacecraft, where he and the Kree Supreme Intelligence, , read her mind and find out how she became Ms. Marvel (nice opportunity for a quick origin recap, being that we’re a year-and-a-half into the book and newer readers might be unfamiliar with it). 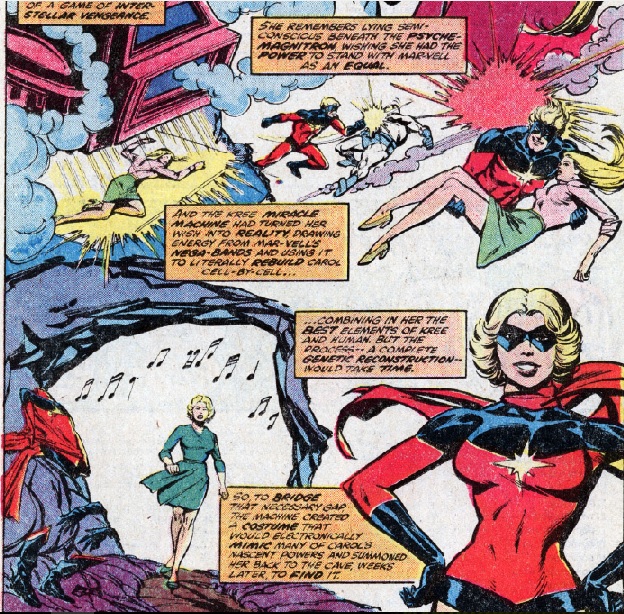 It’s a bit of a retcon, because in prior tellings, she was more of a “victim” of Yon Rogg’s genetic manipulation, but here she actively wants to have super powers.  It also explains the schizophrenia we’ve seen in earlier issues of this series by saying that when she got Kree powers a Kree mind was also delivered into her brain.

In the end, the heroes escape. The cover bills this issue as the first time Ms. Marvel and Captain Marvel meet, but they’ve met before.  Several times.  But it was back before Carol Danvers got her powers. Although the cover mis-states the nature of this team-up, the characters are clear about it in the book itself. 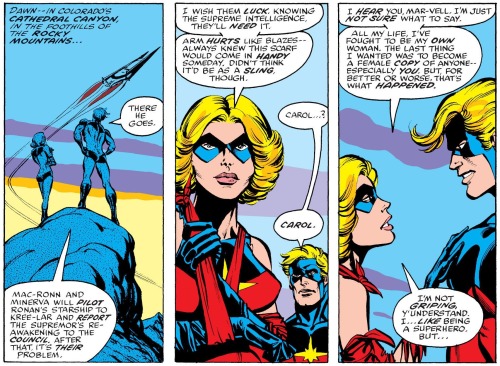 On a side note, it’s pretty cool to see Mar-Vell in chains and not Ms. Marvel.  On the other side of Marvel’s 1970s legacy females, Spider-Woman is frequently depicted in various states of bondage.