This is the very first shot of the evil mutants team, and rather than causing mayhem or committing felonies, they’re eating a meal.  But look how Stan and Jack tell a whole story in a single panel: Toad is grotesque—one hand is bigger than the other—and Quicksilver tells us he’s “chomping” his food.  Quicksilver is scolding someone, and calling them a “fool.”  Scarlet Witch is asking him not to get into “another” fight, revealing that her brother is kind of dick and that she’s a person who places at least some value on peace and getting along.  And Mastermind is hitting on Wanda.

The only thing I can’t figure out is what’s going on with the mashed potatoes.

At the end of the issue, the X-Men foil the Brotherhood’s plans, but in the process Professor X loses his powers—which will be a recurring trope for the character. 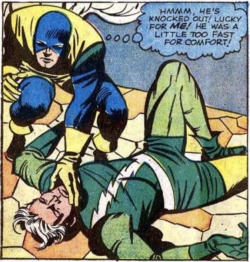 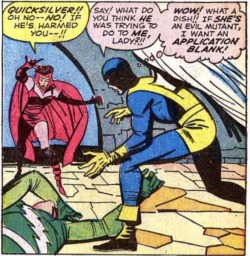