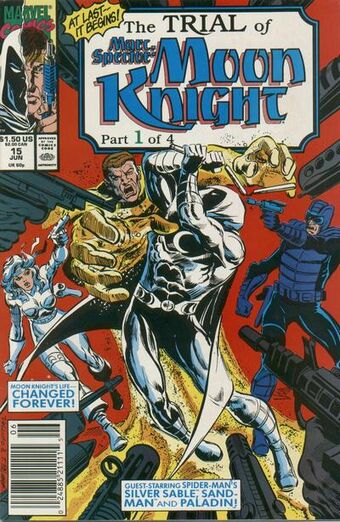 Marc Spector is tried for crimes committed during his mercenary days in the country of Bosqueverde (obviously fictional).  The country’s leader hires Silver Sable and her Wild Pack to kidnap Spector out of the U.S., and, ridiculously, Marc Spector—without his Moon Knight gear—is able to escape Sandman, Sable, Paladin, and the rest of her gang for an entire issue until he surrenders. That’s right, he surrenders.  Sandman can’t capture a well-trained army dude with no powers and no weapons.

From there, he’s in the fake country’s prison, from which he escapes and foils a plot to assassinate the leader of Bosqueverde, exposes corruption in the land, and gets pardoned for his crimes.

Meh.  This story is interchangeable with Punisher, which Dixon also does scripts for.