In my opinion, this is one of the most literary comics Stan and Jack ever produced, and the one to which Grant Morrison owes some of his greatest stories. 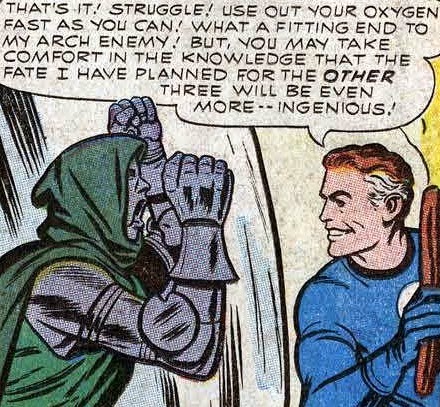 Doctor Doom returns and bodyswaps as Reed Richards, giving birth to my favorite Jack Kirby panel of all time: Dr. Doom doing an evil laugh while disguised as Mr. Fantastic.

But more importantly, this is the first issue where the creators of a comic appear in the comic itself.  And I don’t know if anyone has ever written about this, but you never see their faces—they’re always obscured… So, you’ve got a comic about Dr. Doom—who isn’t seen without his mask for decades—putting on a mask to appear as Reed Richards, and the creators themselves appear in the comic but their faces are similarly obscured, which seems to align them with the villain and not the heroes, no?

Also note: When he takes off his mask, Stan and Jack are horrified, giving credence to the theory that Doom does in fact have a horribly scarred face–as opposed to the contrary theory which is that he looks fine but his vanity makes him believe he is ugly.

This scene of Doom-Richards and Thing is hilarious.