The Tuska art fill-in issue notwithstanding, this is the first really, really good Roy Thomas Avengers script—and having Big John Buscema on the art for the rest of it, of course, makes it stellar. There’s a lot going on here, starting with an Olympus backstory that’s really just setting us up for #50. It’s a way to keep Hercules offscreen while we get an adventure that almost feels like an X-Men story.

The only real weakness here is, above, Captain America’s complete lack of personality. He quits the team and Hawkeye, the recent ex-criminal, reminds him of his oath and duty. Cap almost feels like a whiner, saying how he wants some “me” time as Steve Rogers. On the one hand, I get the burden of sacrificing self for service, but there’s really no other point during Cap’s decades-long career that he acts like this.  Plus, before he resigns, he boasts about his role in the recent Avengers tales.

Best thing about this story: Magneto. Like, how he starts the story making a speech out to space, and Toad just says, basically, “I believe in you, dude! What’s your plan?” And Magneto slaps the taste out of his mouth and scolds him for asking the very same question Magneto was just speechifying about.

Whatever dude. Such a dick.

Also in this story, in the fill-in middle issue by George Tuska, we get the first appearance of the new Black Knight: Hero version. Dane Whitman, nephew of the bad dude, decides to take up the mantle and be a hero. Still an extraordinarily lame character.  And Hank is starting to have side effects from becoming Goliath.

During the big fight scene, Wanda gets shot. 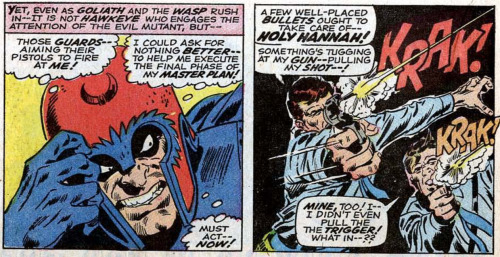 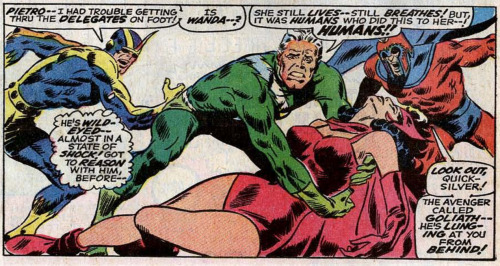 This helps explain why, at the end of these issues, Quicksilver decides to run off with Magneto.

And it’s revealed that that was how Magneto planned it… 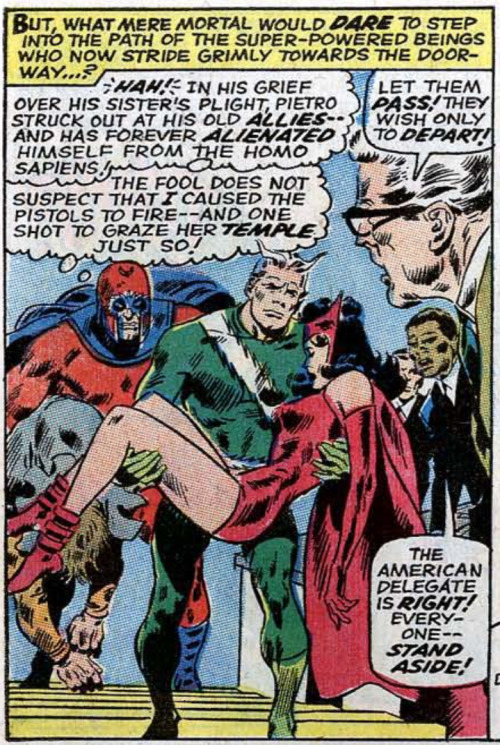