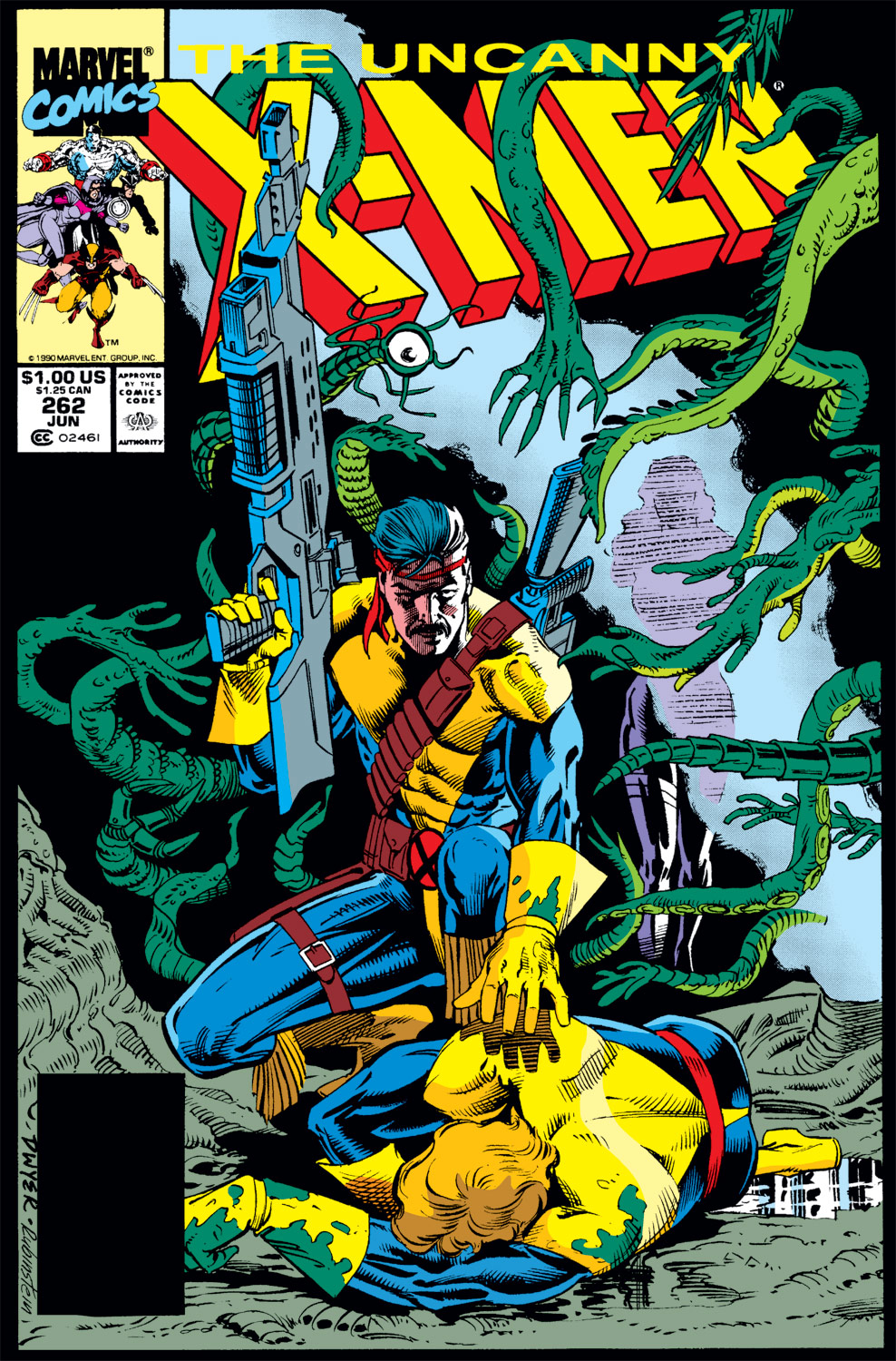 On the splash page, Forge looks—and has an interior monologue—like Punisher.

This is what happened to Marvel in the 1990s/pre-Image era.

Masque, a Morlock, has the ability to change other people’s faces, and he’s turned his allies into fake X-Men, who are trying to kidnap Jean Grey.  Forge and Banshee save her.

After the incident, there’s about five pages of dialogue recapping all the various goings-on in the X-Men and X-Factor books, like how Banshee and Forge are part of Moira’s new X-Men team, the Reavers are hunting mutants, Freedom Force helped fight the Reavers, but the Freedom Force also hunted and captured two young X-Factor members (Rusty and Skids), etc.

Then the Morlocks attack AGAIN and kidnap both Banshee and Jean.  Hence, the scans above—Forge has a solo rescue mission, complete with flashbacks showing that he’s a Vietnam veteran.  That’s why he has a headband.  Every 1990s Vietnam vet dressed like Rambo.  And we learn that some of the Reavers served with Forge in ‘Nam—which means a few will be showing up in Punisher.  Like Pretty Boy and Bonebreaker. 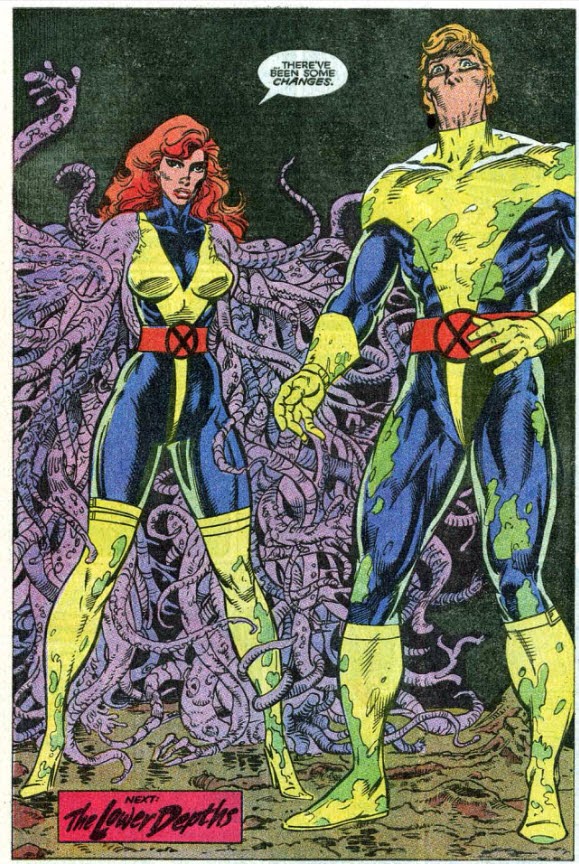 The team continue through the Morlocks’ sewers and find Colossus and Callisto (Callisto was kidnapped after hanging out with Excalibur, and Colossus was taken a few issues ago). 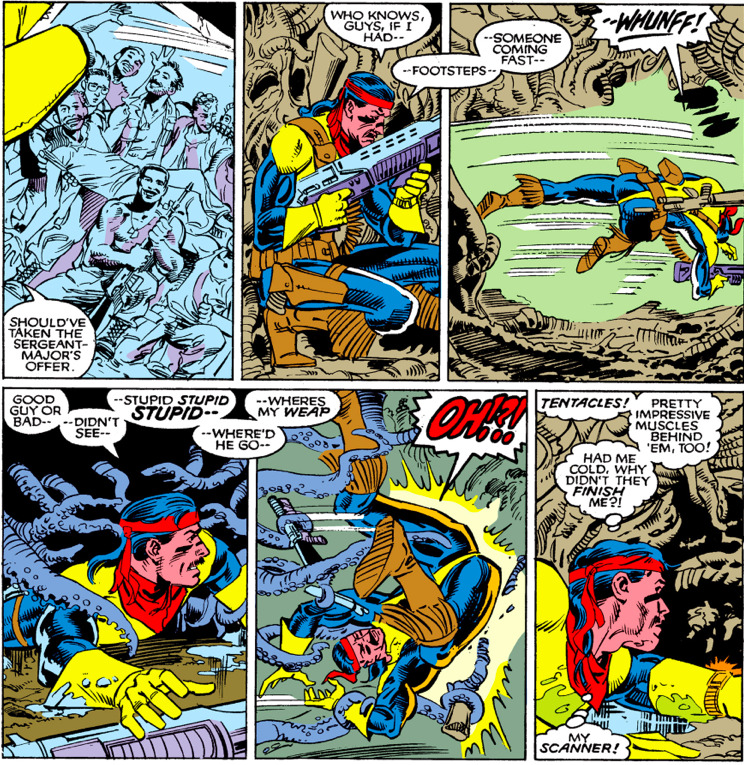 In the end, Forge forges an antidote to restore Jean and Banshee, but Colossus goes back to being a civilian because he still has no memories.  And Callisto decides to join him.  And they kiss! 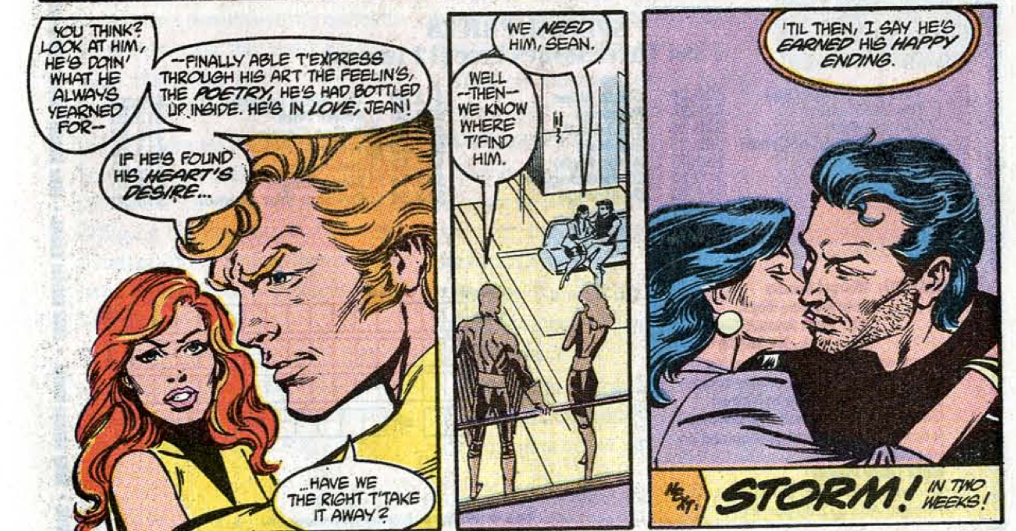 And Callisto has girly earrings!  Ewwwwwwww!

Throughout, there’s a subplot with Genosha threatening to go to war with the U.S. unless they turn over Forge.  So after his big romp through the sewers, Forge has to fight his way through the city streets.  Again it’s a mostly Forge story, until Jean and Beast join the fray and defeat the Genoshan soliders. I should also mention that Valerie Cooper (who is basically the new Henry Peter Gyrich but with pull and power more like Nick Fury) and Alexei Vazhin (who is literally the Soviet Nick Fury—complete with missing eye) appear in the Genoshan subplot.

This book lacks any center in terms of story, and the characters and themes that gave it emotional resonance (Kitty Pryde, Colossus, Scott Summers) are all gone.  X-Men is starting to flounder.  Next issue will bring back Beast, so maybe that will be better.