Okay, lots to talk about here because this is a Chris Claremont book so it’s full of soapy intrigue and subplots, and also it’s got no less than five major characters and half a dozen minor ones.  But let’s start with that sweet splashpage, because at the end of the day Claremont X-books are about family.

In these early issues, we meet the characters and get a demo of their powers as each of them has to walk across the Danger Room.  None of them make it, except for Dani Moonstar who does it after hours because she freaks out during class instruction.

We also learn of a new alliance between former Avengers minder Henry Gyrich and Hellfire Club leader Sebastian Shaw, who have created new Sentinels that attack the students at the local shopping mall. 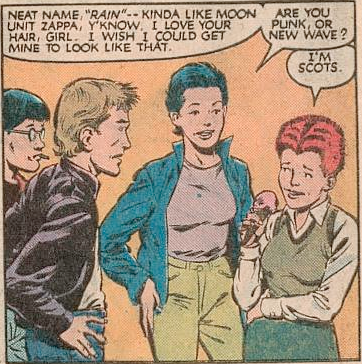 The kids and a double-agent who has befriended them defeat the Sentinels pretty easily.  Note: The Fandom Zone was the title of a comic book fanzine–sort of a pre-internet version of a fanblog. These issues also feature The Brood, who are stalking around X-Mansion, and feature the first appearance of the Demon Bear that haunts Dani Moonstar.  Of course, he’s much cuter when Bob McLeod draws him.

And if that’s not enough, it’s the first mention of Charles Xavier having a son.  So while he doesn’t appear, this is the first time we learn about Legion.

Extra note: Comics Journal, a comic book magazine being published when New Mutants first came out, profiled mutant teams and came up with this interesting analysis: