We all know Norman as the architect of the Dark Avengers, and the man behind Dark Reign.  But before he turned SHIELD into an organized crime syndicate, he tried to be New York kingpin.  Before there was a Kingpin.

The title to this issue is awesome: “The Goblin and the Gangsters.”  Very cool. 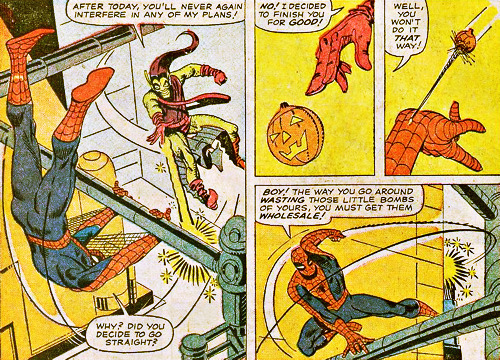 As for the story, it feels an awful lot like the “seed” story for the brilliant Hobgoblin storyline that will come along in about 200 issues.  Green Goblin decides he wants to be a crime kingpin (there’s no Kingpin yet, so it’s a lowercase “k”), and schemes to get a local crime gang put away so he can fill the vacuum.  This is the Green Goblin we will come to know and love-to-hate, the guy who is manipulative and conniving—a much more interesting villain that just some guy in green who flies around attacking Spider-Man. 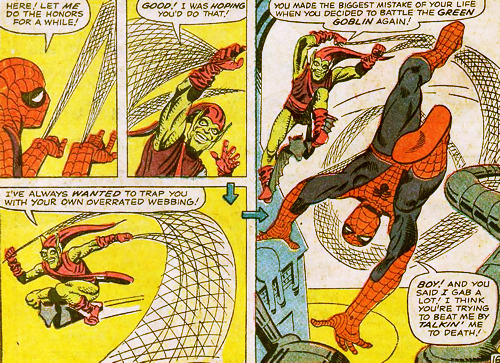 And speaking of Hobgoblin, on the personal front, Peter Parker finds out Betty Brant is pen-palling with future Hobgoblin Ned Leeds, and he gets jealous.

It was the first time Goblin defeated Spider-Man, and forced him into having butt sex.

Okay, not really.  But it sure seems to be implied.

Anyway, in my view this was the arc that established Green Goblin as Spidey’s most diabolical foe.  Some folks say Dr. Octopus is the best Spider-Man villain, but I’ve always been a Gobby guy.

In fact, my biggest peeve about Dark Reign was that Spider-Man should have been the one to take Norman Osborn down.

We don’t know that Osborn is Goblin yet, but we do get the first appearance of Norman out of costume…

He’s unnamed, but that haircut is unmistakable.

Creators: Stan Lee, Steve Ditko
Grade: B.  Not much “happens” but so many seeds are planted.