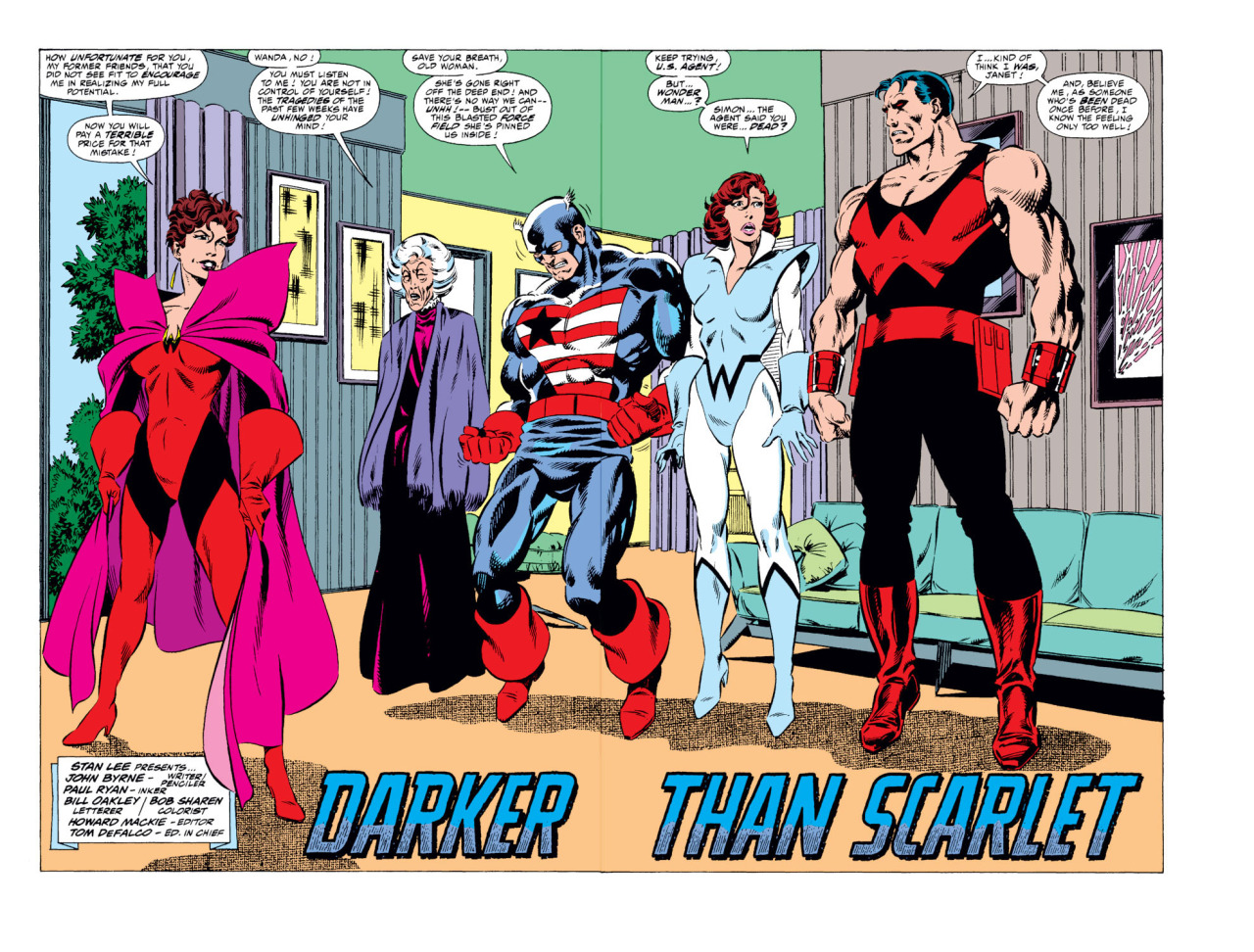 This is the famous “Darker Than Scarlet” story in which Wanda does the “Sandra Dee to Slut” transformation, shows up at West Coast Compound acting all hot and sexy.  You know an issue is a labor of love when it has a great title like the one above, and then has a great tagline on the cover: The Witch is Back! This may be the dirtiest sequence ever printed in a Marvel Comic.  It’s also rape.  No means no, Wanda.

And this may be the most confusing one… Immortus is messing with the team by popping and out (he sets Tigra free from a cage that Hank Pym put her in because she is completely feral again).  Immortus works in the time dimension, and for several issues has been destroying alternate realities.  (Uncharacteristically, Uatu the Watcher has NOT shown up to warn everyone.)  In the panels above, we learn that Scarlet Witch’s hex powers also work in the time dimension—a retcon of her abilities that I’m pretty sure isn’t carried forward after John Byrne leaves this book. 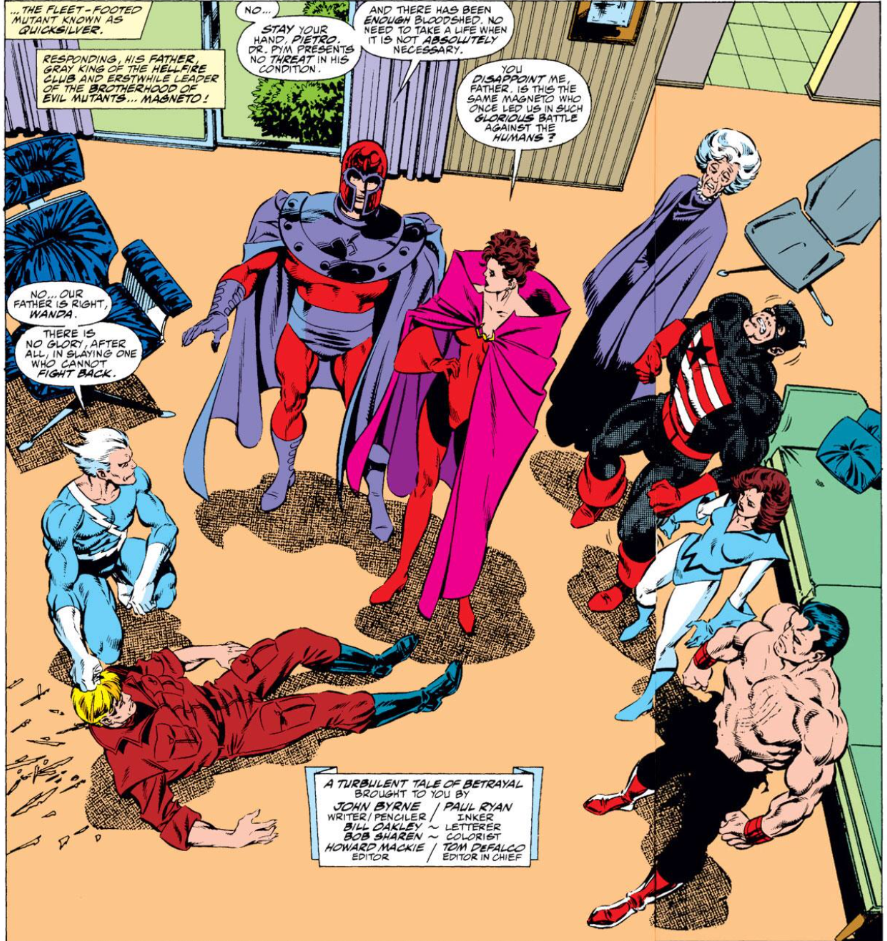 With all the Witch hubbub, her daddy Magneto arrives—along with Quicksilver (teleported via Lockjaw)—and the father-and-kids trio decide to reform the Brotherhood of Evil Mutants. Iron Man and Magento tell each other their feelings. Nice to see that Iron Man figured out how to protect himself from Magneto.

Just as its getting good, it gets rushed and bad, because John Byrne, once again, couldn’t get along with Marvel Editorial (or vice-versa, whatever), and he’s fired from the book. So he wraps this complex story up quickly.  There’s a fight among the heroes… 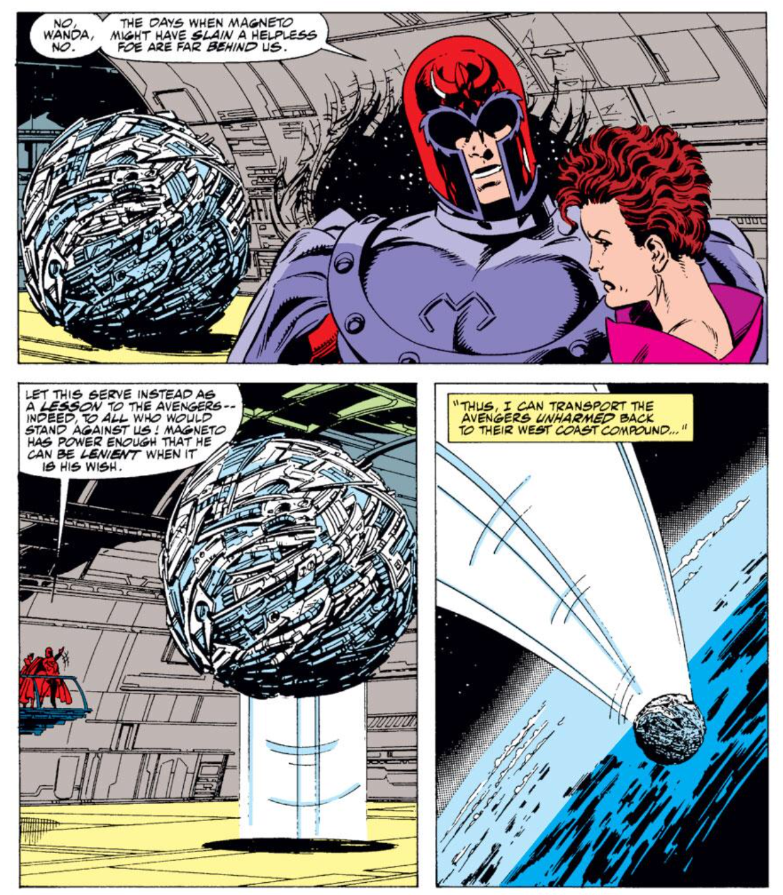 …And Magneto wraps the Avengers up into a ball of steel and sends them away.

After some really interesting and controversial stories, Byrne leaves in a hurry and next issue we get…Hydro Man.

Creator: John Byrne
Grade:  Really, this is a C+ because it ends so abruptly, but knowing Byrne would have done a great story if he’d been allowed to, I’m giving it a B+.