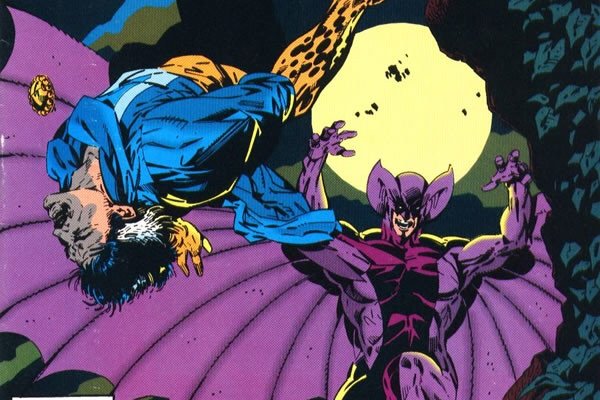 We’ve been building to a big vampire story for a while now, and here it is.  We find that the recently introduced Victor Strange, brother of Dr. Strange, who is a vampire, was “turned” by a voodoo priestess who has stocks of vampire blood that she drinks to stay immortal.  Her stock is running out (because Dr. Strange killed all vampires way back in Dr. Strange #62), so she’s making new ones so she can get more blood.  Dr. Strange’s spell killing all vampires is still in effect, so these are “living vampires” like Morbius.

The priestess was holding both Morbius and Victor and draining their blood, when the two escaped and ran to Doctor Strange for help.

It gets kinda crazy from there, with the priestess trying to force Victor Strange to love her using love arrows, Victor dressing like Baron Blood, Clea getting shot with an anti-love arrow and hating Dr. Strange and, of course, ultimately an appearance by Brother Voodoo who brings zombies  to fight the vampires. That’s probably the most awesome thing Brother Voodoo has ever done.

In addition to a great zombies vs vampires fight, Morbius rips an alligator’s head in half. He doesn’t want to kill a human, so he kills the poor alligator, but then doesn’t even drink its blood.  Unnecessary animal cruelty!

Also there are demons and a minotaur.

Yeah, lots going on in these issues.

By the end, Strange’s protection-against-vampires spell is gone and his brother is basically the new Baron Blood.

Creators: Roy and Dann Thomas, Butch Guice, and Jim Valentino (#17 only)
Grade: B-