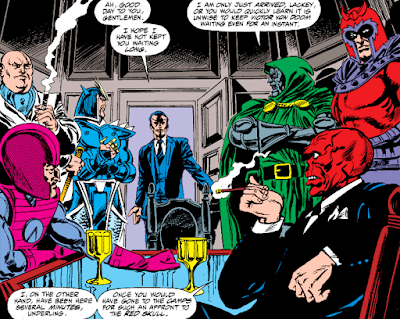 We’re deep into Acts of Vengeance at this point, and Loki still hasn’t’ revealed himself-even to the reader!  That’s kind of neat, but it does make me wonder how a collection of egomaniacal supervillain geniuses like the ones above could get this far without questioning who this new dude with the long cigarette is.

The Avengers’ Hydrobase is destroyed, and now they’re ack in Manhattan in a subbasement way under the area that used to be their Mansion (before it, also, was destroyed).  Being in New York, they’re ready to take on Freedom Force’s Blob, Avalanche, and Pyro, who have decided to go full-blown evil mutant now that their boss, Mystique, has gone into mourning over the Destiny’s death.

Avalanche’s new costume makes him look like Rom the Spaceknight. 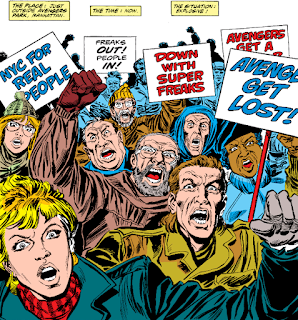 During the battle, anti-superhero protesters converge on the fight scene.  That’s kind of been building in the background during Acts of Vengeance, but I feel like it wasn’t built up enough.  It was, after all, what Loki really wanted to do—start mischief by getting people to fear heroes.  Various members of the cabal also join the fight—notably Mandarin and Wizard.  The evil alliance argues a lot.  It all feels a little disjointed, but it works in a decompressed story.  Black Widow and Hellcat happen by to help with Mandarin. None of this is bad, it’s just chaotic.  And I’m not even doing a full blow-by-blow, because it’s just too much.  (There’s more on the Nebula subplot, for example.)  On the one hand, chaos should be expected when you’ve got Red Skull, Dr. Doom, Magneto, etc. all on a team led by Loki, whose sole purpose is to cause chaos.  But as the penultimate story for a huge event, it would have been nice for there to have some kind of conclusion.