As I write this, Marvel has just relaunched it’s old “Crazy” magazine as a humor comic hosted by Obnoxio the Clown.  It’s about as funny as the original Crazy Magazine of the 1970s, which is to say, it’s not funny at all.  Marvel’s attempts at humor usually fail. 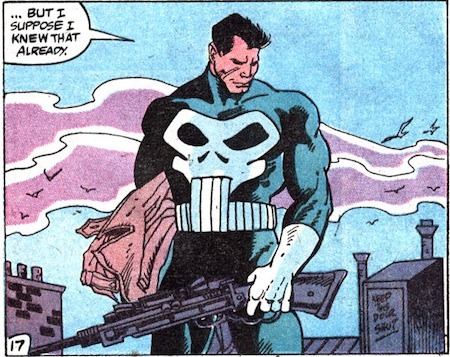 There was that one great all-humor issue of What If? that worked as standalone satire, but Marvel humor is usually best when it is part of a story: Peter David did some great, funny stories, for example, during his work on X-Factor and Spider-Man.  So Damage Control could have worked, but, sadly, it really didn’t.  I still admire the attempt, but overall there was so much opportunity here that just got squandered by mediocre execution.  I did like this scene with Punisher:

Punisher just shared from the heart about how he lost his family, and a man from Damage Control tries to relate:

Anyway, these issues tie in with the Acts of Vengeance event.  In issue #1, they go to The Vault to help fix damage done during Fixer’s breakout during Avengers Spotlight.

Also in issue #1, we learn that Kingpin has an ownership share in the Damage Control organization, so in issue #2 Punisher visits their headquarters.

In issue #3, we focus on She-Hulk.  At the time, John Byrne was establishing her as a fourth-wall breaker, and that tradition is continued here.

But in all issues of this book, there are tons of cameos and appearances by various heroes and villains.  Like I said, lots of opportunities for cool stuff and self-aware satire, but for some reason it just doesn’t work.  I want to blame the writer, but it’s just as likely that this is a great idea that’s impossible to execute without it feeling like forced fun.

Finally, issue #4 wraps the miniseries as SHIELD engineers a corporate takeover to boot Kingpin out of his ownership shares. And, at the very end, is a publisher crossover…

Creators: Dwayne McDuffie and Ernie Colon
Grade: C-.  Some good ideas, but overall this book fails in the execution.