When you talk about the greatest artists in Amazing Spider-Man history, you’re probably looking at three names: Steve Ditko, Todd McFarlane, and the man who begins his long, long run with this issue: John Romita Jr. 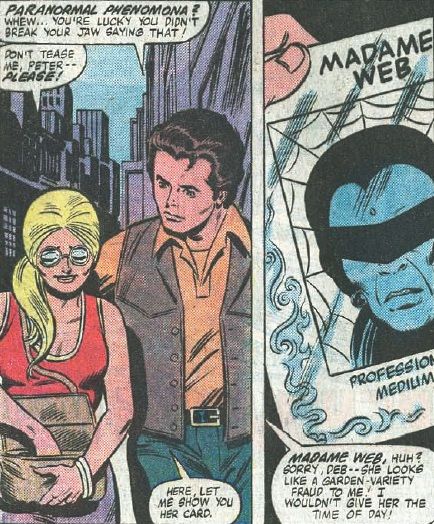 In this issue, Denny and John introduce what will become a major character: The psychic Madame Web.  Newspaper publisher Rupert Dockery, who moved to the East Coast from L.A. (where he wrote bad articles about Spider-Woman) is trying to take over Peter’s employer, the Daily Globe, and he’s willing to use guns to do it.  Spider-Man and Web stop the attack, but The Globe is devasted and goes belly up, which means Peter Parker is free when he gets a call from an old friend… It’s a wonderful bait-and-switch by Denny O’Neil.  We think Peter’s now going to be working for Dockery, but instead O’Neil has set up the original status quo so we can get back to the characters everyone really cares about.