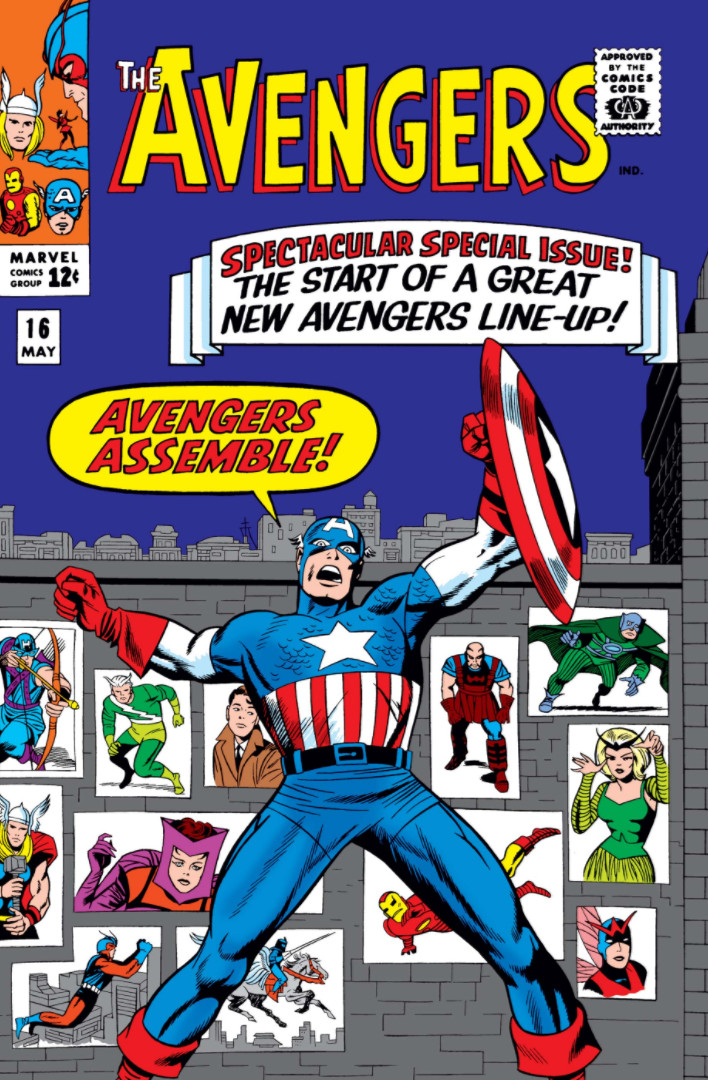 It starts with the cover. “Avengers Assemble!” The first time we’ve seen Cap make the battle cry, and it’s the first time that it feels like their official slogan. This is a tremendously important issue for Marvel Comics and for the Avengers.

First of all, it’s the most “continuity heavy” book I’ve read so far. In addition to being the second part of a story that began in Avengers #15, there are specific references to three other issues by number, and then a general reference to the X-Men, all in little yellow editor boxes at the bottom of a panel, like footnotes.

There have been a few of these in other issues before, but never so many in one—this marks the beginning of a trend in Marvel publishing that would continue well into the 1980s. It was how Stan Lee elevated his comics into something that felt important—miss one issue, any issue, of any Marvel comic, and you were likely to fall behind. Catch every issue, and you could read those boxes and say, “Yeah! I knew that!”

I’d argue that it also started the comic nerd hunger for memorizing issue numbers and stories, and being able to recite them at will. This has since petered out, when Marvel reinvented itself after the disastrous 1990s, and when overprinting and the speculator market had essentially ruined the collectability of comics. But that’s not all! We also get confirmation that Zemo is dead—it’s not just an off-panel comic book death—because Captain America digs a grave for him, with his own hands, and then gives him a nice Christian marker.

Scarlet Witch and Quicksilver go from being pen-pals to members.

But this is also the issue where Hawkeye moves from D-list villain to C-list hero. 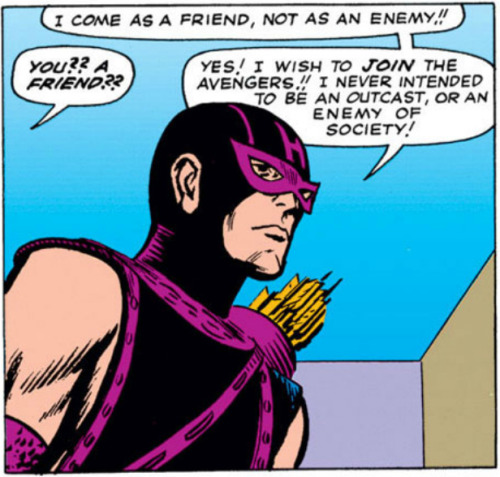 And he starts right at the top–looking to join The Avengers.

He proves himself by knocking out Jarvis, tying him up, and then freeing him with some fancy archery. Which kinds of leads to a conclusion that the Avengers are dicks. I mean, they let Jarvis stand there all tied up while Hawkeye tells them all his life story and why he’s ready to switch sides and become a good guy.  Plus, Giant-Man tosses Cap around like a rag doll.

And there’s still more! This issue is jam-packed!

The Avengers hold their first press conference, in which they tell the world they’ll be disbanding. Wasp is tired of being in danger all the time. She’s so annoying in these early issues—Stan’s biggest writing weakness is clearly women. Anyhow, it turns out, Iron Man quits and gives the mantle of leadership to Captain America. Giant-Man and Wasp leave to have fun/do science. Or whatever. And Thor is busy with the war in Asgard, so he’s not even around.

In the last frame, we get the new lineup, which looks an awful lot like a Thunderbolts-style lineup. Because, oh yeah, one MORE thing that happened was Quicksilver and Scarlet Witch wanting to rehabilitate themselves, too.

Lineup changes would become an Avengers tradition, as would covers like the one to this issue, showing a wide array of characters and letting readers guess who’d actually join the team. 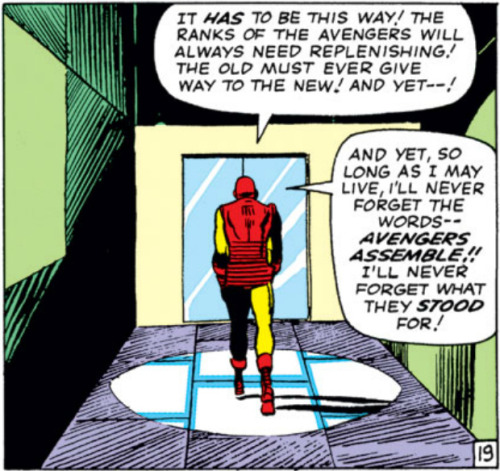