It’s more than a little annoying that so many early Black Panther stories involve weird, mean African Gods.  But as far as these things go, this one is better than most.  Of course, it involves the whole team saving the day in the end.

But at least they acknowledge that he’s a very busy king.

Black Widow is still hanging out with The Avengers during this issue because she’s conflicted about going back to San Francisco with Daredevil (after the two of them helped defeat Magneto last issue).  But in the end, she decides that team life is not for her and she returns to Matt Murdock.

But not until after Iron Man hits on her.  She’s been with Hawkeye and Daredevil, both sexist alpha males (and both kinda broke most of the time), but she says “no” to Tony Stark the millionaire.  Good for her! 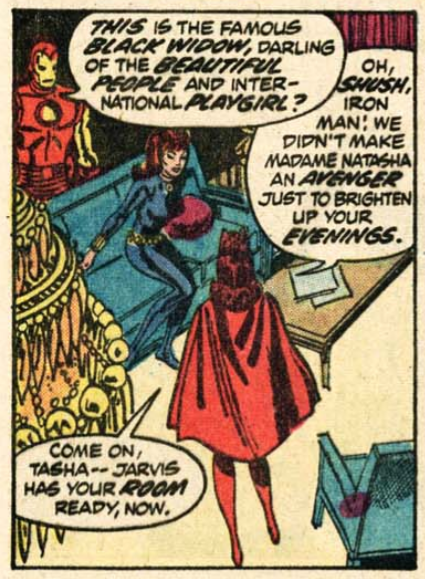 She’s staying at Avengers Mansion because she’s homeless.  But by the end of the adventure…

She quits and goes back to DD. 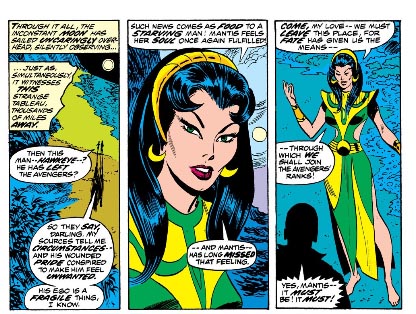 And Mantis joins in her place.  This is also the first time we see Mantis, a character who Steve Englehart created, in his own words, to be a “hooker” who causes dissension between teammembers.  I’m sure he never would have guessed she’d be a movie star. 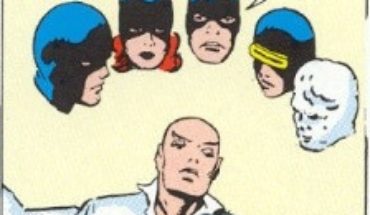