As it stands, though, the first appearance of The Ani-Men is still a fine story.  The story starts with a good old-fashioned prison break, and I do love prison tales… Stan Lee did love his animal-villains, and this puts Daredevil on a par with Spider-Man’s villains like Vulture and Scorpion.

And the story has a lot more of these villains than Daredevil.

But that’s what I mean: It’s wacky and wild, and would have been right up Steve Gerber’s alley. During the prison break we get some underwater action, which offers a glimpse into another use of Daredevil’s powers… 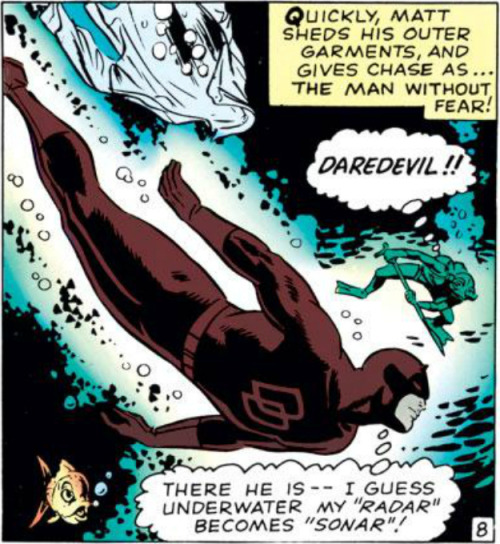 Then, in the end, we get a final box promising a new art team (which is too bad, because Bob Powell and Wally Wood were doing a fantastic job).  It’s interesting how much Stan Lee’s hype emphasized creators, because I’m pretty sure the other major comics publishers at the time weren’t doing this kind of thing.

As for why Wally left, it’s because he couldn’t STANd (get it?) it at Marvel.  He got a writer credit for #11, which is a very rare case for Marvel in 1965—as Stan wrote everything—but that was it for him and Marvel.

Seriously, though, the credits over these issues are very interesting…

Then Stan Lee feels compelled to allow Wood a writer’s credit in #10.

And by #11, Stan was taking the reins again.

Then, with #12, they were introducing John Romita.

There’s got to be a backstory here, right?