This issue starts by introducing Jubilee, who appears to be a young kid version of Dazzler.  She’s doing a light show at a mall.  Security calls the “M Squad” to capture her.

Meanwhile, in Australia, the Y-Chromosomed X-Men decide to have Gateway teleport them to that very same mall.  Because everything’s been serious lately, and the girls just wanna have fun.

So, Rogue, Storm, Dazzler and Psylocke go to the mall, kid around and have fun (lots of cute character moments), and ultimately meet the M Squad. 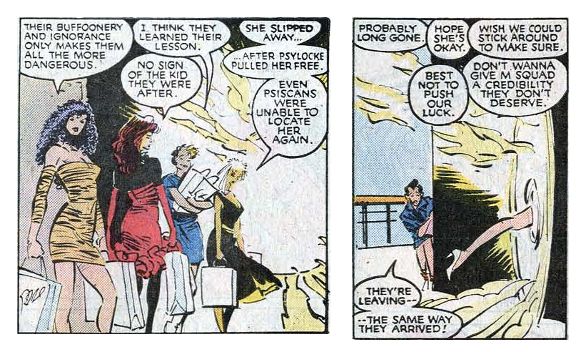 Although the X-Women don’t actually see or meet Jubilee, after they take down the M-Squad, Gateway teleports them home and Jubilee jumps through the portal before it closes.  So, I assume they’ll meet next issue.

Chris Claremont had a fairly predictable battle rhythm: Big event, slow/sad clean up issue, pallet cleansing issue (often with set up), build-up issues, next big event.  He really was ahead of the curve on this—nowadays, everything Marvel does seems to be about event build up.

Anyway, we just had Inferno and sadness about Madelyne Pryor, so this was the “fun” issue.  I think it’s the first “ladies night” issue in comics.  Correct me if I’m wrong.

Also in this issue, Claremont plants heavier seeds for the return of Carol Danvers, whose psyche is occupying space in Rogue’s head—and starting to dominate at times, making it appear that Rogue is having outbursts.  She begs Psylocke for help, but that’s a no-go.