I (gasps) liked this story.  I really, really like Steve Leialoha’s art.

It starts with Spider-Woman fighting the lame-ass villain The Fly, who is losing his powers.  In an effort to reclaim them, he hired Dr. Malus.  Malus.  Yeah, he’s a bad doc.  Malus has a theory that an infusion of a super-powered person’s blood will save The Fly’s own powers, so they pick Spider-Woman because (a) she’s in Los Angeles (and nobody else seems to be), and (b) she’s a girl so they can take her out easier.

But she basically kicks both their asses.

In the process, though, we learn that when Spider-Woman’s partner Scotty McDowell (her version of Punisher’s Microchip) was poisoned by Enforcer and later cured, the venom-slash-cure both came from Dr. Malus.  The same dude trying to cure The Fly.  And the cure had a catch: It turned Scotty into a crazed supervillain called The Hornet. 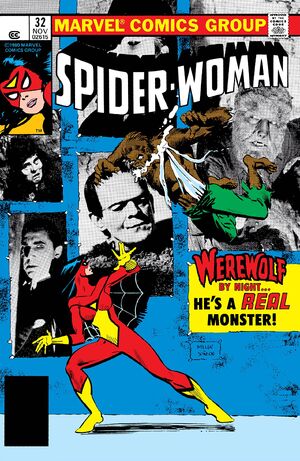 And in the great Marvel tradition of tying EVERYTHING together, Werewolf By Night shows up because he’s also been given a serum by Dr. Malus that made him crazy, so he also is forced by Malus to fight Spider-Woman.

So I said I really like Leialoha’s art, and I do, but look at those Frank Miller covers!  So freakin’ cool.  And you can see a little Miller influence in Leialoha’s art as well.

The art was much better than the story here, but the story was still OK.  It’s Mike Fleisher’s final issue.  After a few fill-ins, Chris Claremont will come back for a second run at this character, and rescue this book.