After six issues that were almost unreadable, we get a solid story.  And issue #8 was the first Invaders comic I ever bought, probably at a yard sale or a used book store somewhere for a dime or something.  The team is in London taking a break when Human Torch happens upon a vampire attacking a lady.  They fight, and the vampire has some kind of wind ability to douse Torch’s flames, but Torch is enough to scare him off.

Torch takes the lady, Jacqueline Farsworth, home where it turns out her dad Lord Falsworth, who served as Union Jack in WWI.  He’s apparently a cross between Captain America and Black Panther.  I do love that cover to #8. 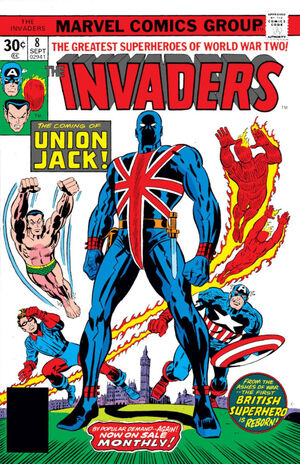 It also subsequently turns out that the lady’s cousin, John, is Baron Blood.  The cover to #9 is good, too. 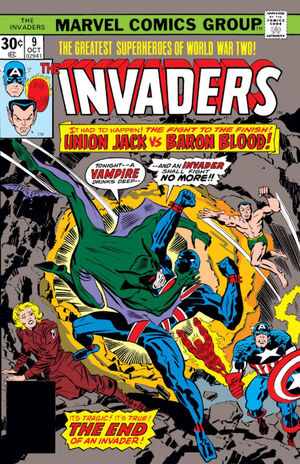 Good covers.  Not a great comic though.

When the whole team has dinner at Lord Falsworth’s house, and both Jacqueline and John are present, you can imagine the fun they have.  After several battles with Baron Blood, they kill him. However, Blood had bitten his cousin Jacqueline, who then must be rushed to the hospital.  Issue #10, on the way to the hospital, Captain America tells the story of Captain America Comics #22.  Yes, he’s that much of an egomaniac.  Plus, it lets Marvel reprint a bunch of old stuff that reminds us that Cap was much cooler in those

Golden Age books than he has been in The Invaders.

In #11, Human Torch gives Jacqueline a blood transfusion and his weird blood gives her the super-speed powers that enable her to become Spitfire in issue #12.

Creators: Roy Thomas and Frank Robbins
Grade: C
For the complete history of the MU, year by year, go here.