Hercules gets his own team, and it’s all D-listers.  Black Widow, Angel, Iceman and Ghost Rider.  They even give him Don Heck as artist.  Poor Herc.  Black Widow is the leader. 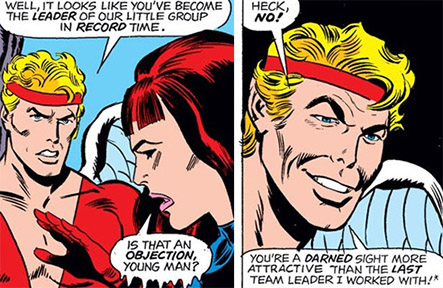 Iceman and Angel are in a normal school now, having left Xavier’s school.  They’re in college at UCLA.  But not for long: The campus is invaded by Harpies looking for the Greek goddess Venus. Iceman fights them by putting them in ice cubes.  It’s a silly use of his powers, but I’m gonna say that, coupled with his goofy repartee (“catch my snow drift?”) that Bobby is intentionally humiliating them, rather than just being a lame hero.

In a typical Marvel coincidence, Natasha Romanov is on the campus at the same time, on a job interview to be a Russian language professor, so she joins in.

Then, the Gods Pluto and Ares appear and says what this is all about: Hercules must marry Hippolyta , Queen of the Amazons, or the universe dies.  This leads to a big battle on Olympus.

Of course, the marriage never happens and in the end the heroes are all sent back to Earth by Zeus.

These aren’t “important” stories, but there are a few lasting effects on Angel, who decides to go public with his secret identity and changes to a horribly gaudy new costume.

Their first adventure has the crew helping Hercules defeat Pluto and Ares.